As a group of five, we left the tiny town of Augusta, MT, with one week and just over 200 miles to Canada. We picked up the trail from Benchmark Ranch and began walking through the Bob Marshall Wilderness. We started later than usual but still put in 22 miles ending near the Chinese Wall.

The next day we continued on through the Bob. We began to notice more and more smoke in the air as we moved north. We walked 33.6 miles with tons of climbing.

We were all getting a little anxious for the end of the trail so we pushed for a 36 mile day. At this point, we were just 15 miles from our last town stop in East Glacier.

We woke up early for our short day of 15 miles. Before noon, we arrived in East Glacier. We had noticed the smoke filled skies and weren’t surprised to find out that part of Glacier National Park was closed. Thankfully for us, the fires were on the west side of the park and the CDT was still open. However, the closure pushed many more people to the east side of the park causing competition for back country permits required for the park.

Gusher’s friends DK and Turk met us in East Glacier to complete the final 100 miles to the border meaning we needed two permits to accommodate our group of 7. The three of them went ahead to get a head start and setup the permits. Meanwhile, BigFoot, Hyrobics, Gasket, and I got a room in East Glacier for our final town night before finishing the trail.

The following morning, the four of us hit the trail around 7:45, a late start considering we had 35 miles to hike to join the rest of our group. We began our morning hitting the National Park boundary after just a few miles. Once in the park, we were soon greeted by a half dozen big horn sheep on a morning stroll. 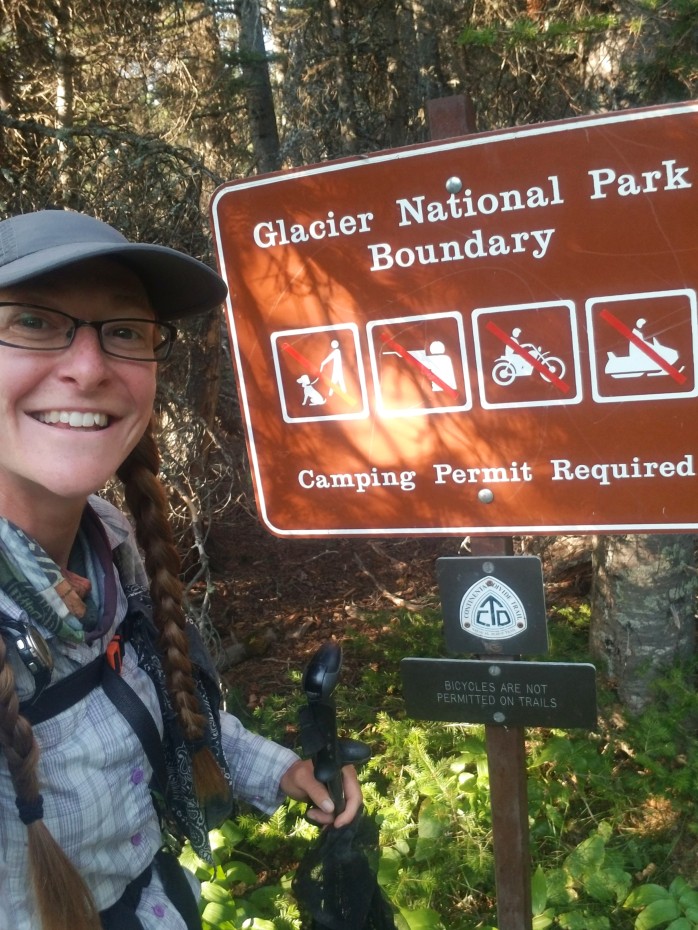 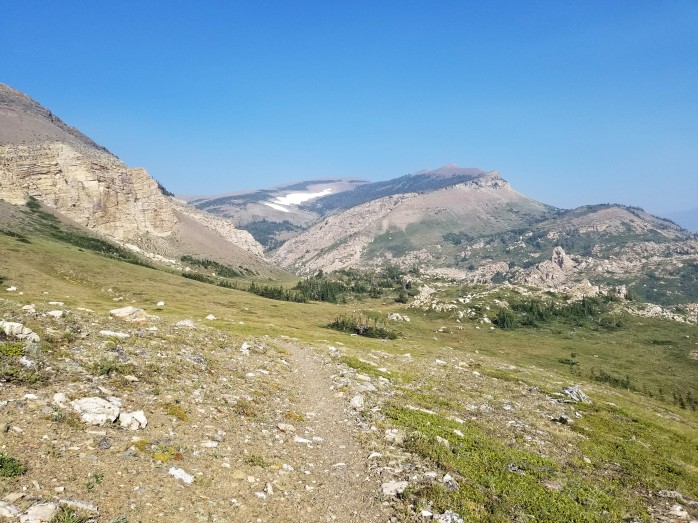 We could tell immediately that Glacier NP was a magical place with incredible features all around us. The smoke hanging in the air, however, was somewhat of a buzzkill. We called the views the “low def” version. We will absolutely be back to enjoy the high def version one of these days. Still, we were so, so grateful that the fire hadn’t stopped us from reaching the terminus. 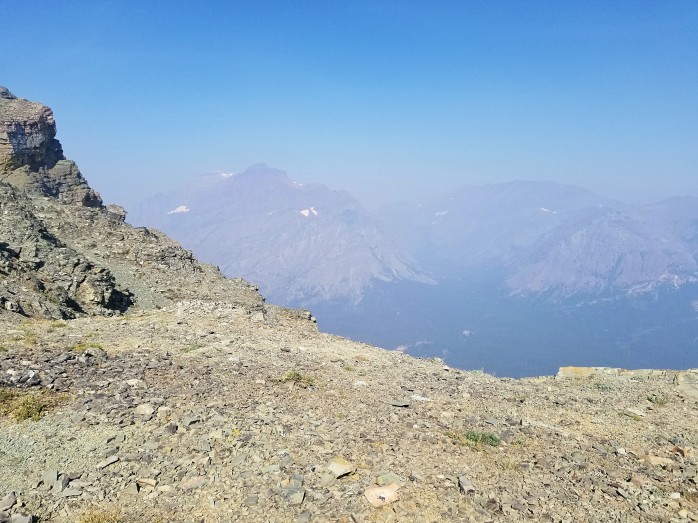 After our first big pass, we arrived at Two Medicine and ate a quick lunch. We still had 25 miles and two 2000+ foot passes to climb. Onward and upward we went, first 2400 feet over Pitamakan Pass with incredible views of glacial lakes at the top. We took a break around 4:00 pm still with about 14 miles and one more big pass to go. 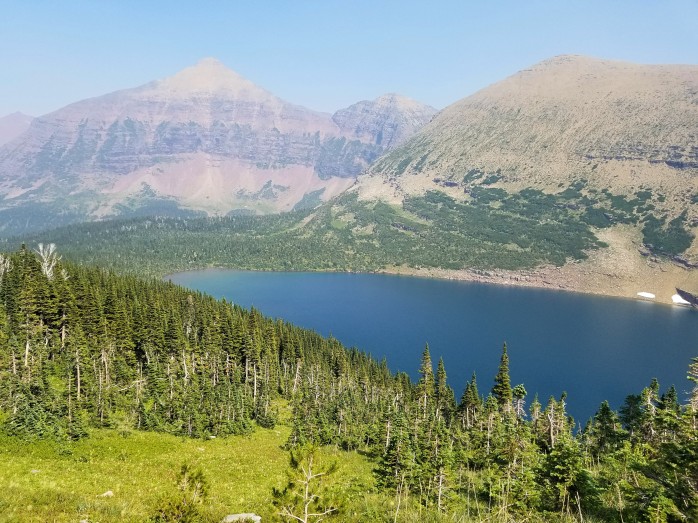 We eventually started our final climb up Triple Divide Pass. Here, watershed is divided three ways – North towards the Arctic Ocean, West to the Pacific Ocean, and East to the Atlantic Ocean. On our way up, we spotted what would be the first of many 1000 foot waterfalls cascading down the mountain. I found myself in the back of the group hiking the pass taking pictures through the smoke. At one point, I turned a corner and was a mere five feet away from a group of four big horn sheep, two adults and two babies. They stared at me for a few minutes so I got out of their way, but then they decided to head northbound up the mountain. I was elated to see them so close up.

I joined my friends at the top of the pass, and we began our long hike downhill still about 8 miles from the rest of our group. We stopped to make a quick dinner and resumed hiking as the sun was setting. We hiked on now with headlamps in a tight group trying to make as much noise as possible to avoid surprising a grizzly. Sean turned a corner with a gasp, I was sure there was a bear. Instead, a huge bull moose greeted us not entirely thrilled with our presence. We gave him plenty of room, but he stayed where he was. We eventually decided to bushwhack off trail giving him lots of room. We still had a couple miles to camp, and we continued being loud. Suddenly, we saw two eyes reflecting in the light of our headlamps. We all stopped and stared as the shining eyes stared back. Bear? We walked slowly in a stare-off with the animal. Eventually, we realized it was another moose, and it let us pass by. Finally, we arrived at the campsite where Gusha, DK, and Turk awaited us. Our long 36 mile day was over.

We awoke early the next morning with only 2 big passes ahead of us and 30 miles to complete for the day. Although 30 will never be an easy day, we felt like we had all the time in the world and took many more breaks than we had been accustomed to. It was really hitting us that we would be done with this trail and heading to our respective homes in just two days.

Although still clouded by smoke, the views were unbelievable. We finished our day at Many Glacier and stayed at the campsite complete with a restaurant, general store, and flushing toilets. Fancy. 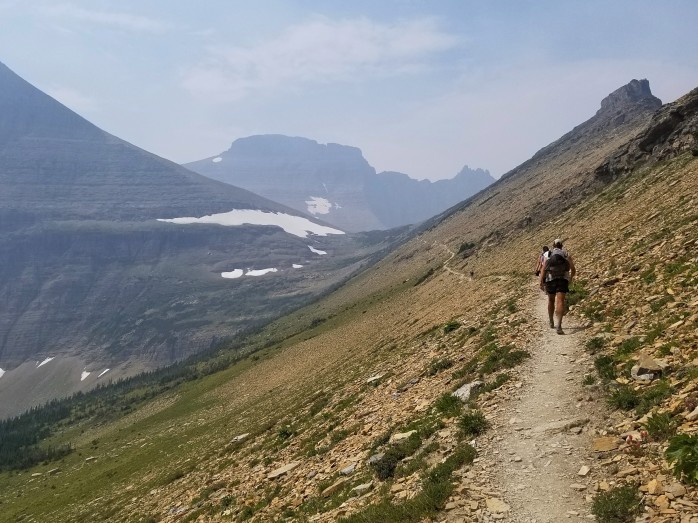 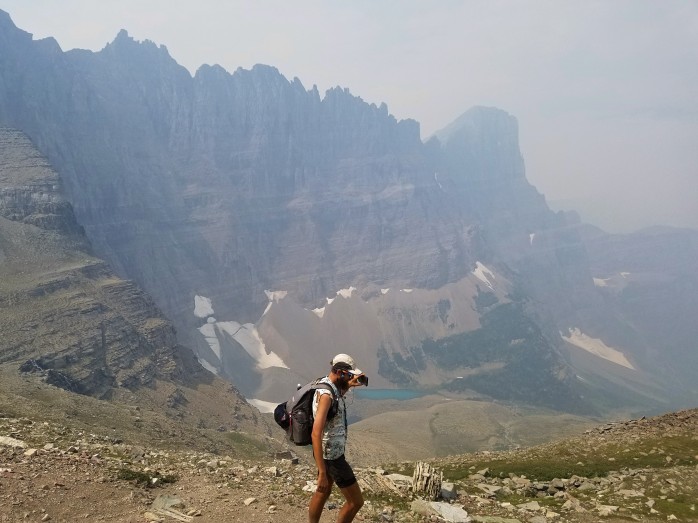 We began our final full day of hiking with a delicious breakfast and coffee. We hit the trail around 8:30 greeted by another massive moose. From here we had just 30 miles to walk to our last campsite at Waterton Lakes just 4.5 miles from the terminus. We spent our day reminiscing over the past four months – the smiles, the miles, the laughs, and hard times. 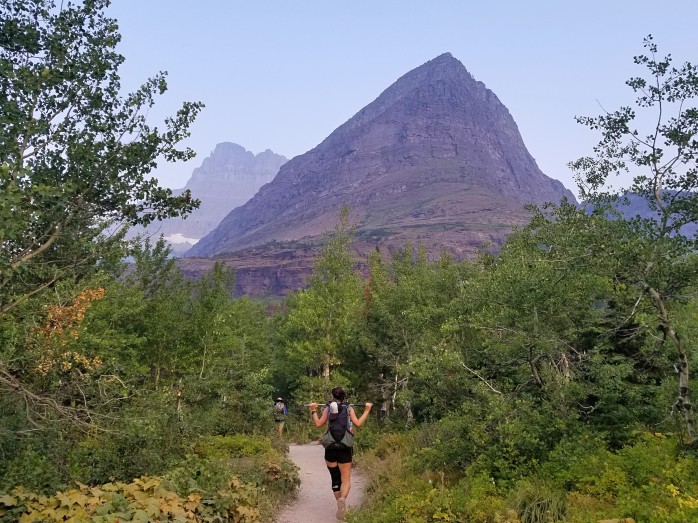 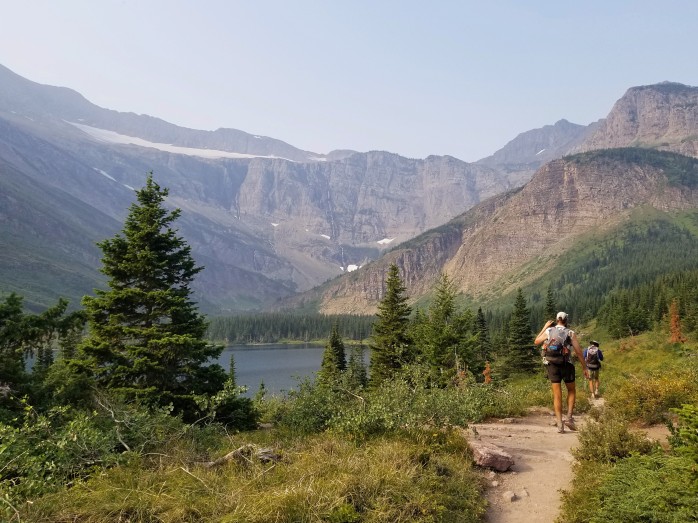 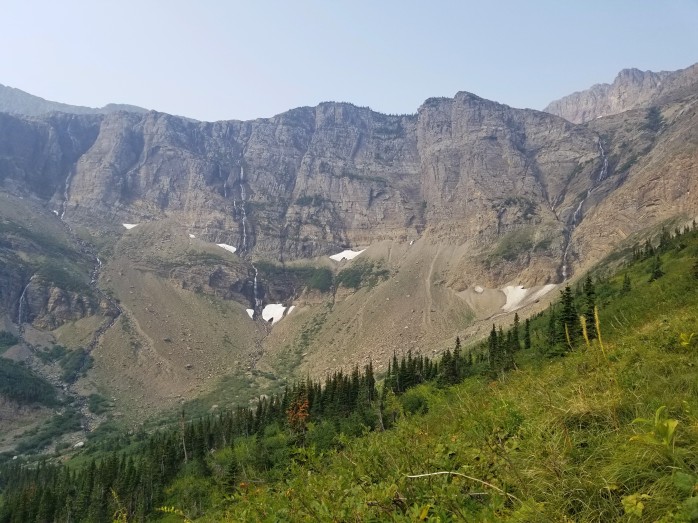 At about 3:00, we started our final pass, nearly 2000 ft over 4.5 miles. Hyrobics and I turned on Jesus Christ Superstar Live at the same time and we let John Legend and Sara Bareilles sing us to the top of the pass. We were stunned to finish our final climb and elated that it really was all downhill to Canada from this point. 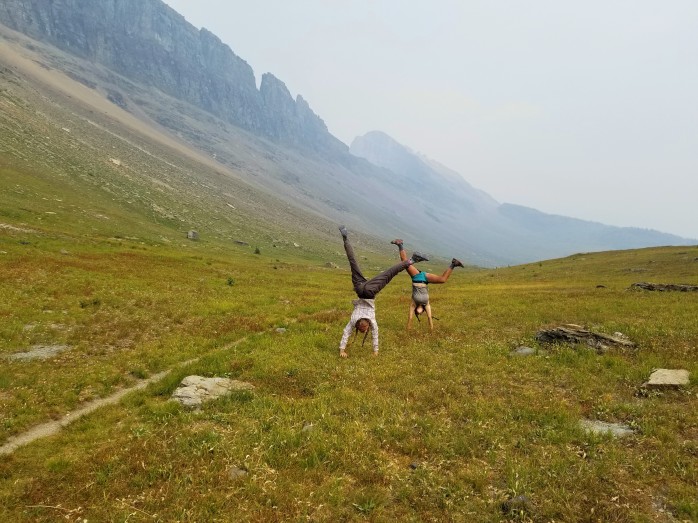 A couple hours later, we arrived at Waterton Lakes campsite complete with a pavilion, boat dock, flushing toilets, and hiker shelters. The group stayed up late excited and somewhat in disbelief that this journey on the CDT and the Triple Crown was coming to an end.

It was still dark when we all awoke in the morning. We hiked the final 4.5 to the terminus nearly at a run. Gasket got ahead of the group (now 9 people) – I think actually running. From the distance, we heard a loud yell. He had arrived, and we were just moments from joining him. Suddenly, we were all at the monument screaming, congratulating and hugging each other, even a few tears were shed.

We spent nearly an hour at the monument taking pics, drinking Irish coffee, and taking it all in. The journey of over 7000 miles was somehow over. After our celebration, we still had another 4.5 miles to town. Eventually, it was time to get out of the woods and return to civilization.

Once in Canada, we stopped by the Visitor Center to take care of immigration which was just a phone call to alert the Canadian government that we had arrived. Next, we headed to get some breakfast and figure out how to get back to East Glacier where we had reserved a rental car. Over breakfast, we mentioned to our waiter that we were all looking for a ride. Suddenly, another waiter heard our $200 offer for the ride, and he was happy to oblige after his shift was over. He had an RV that would accommodate all 9 of us. Score!!! At nearly 6:30 pm, we were back state side at East Glacier. Five of us piled into the rental car and said our sad goodbyes to the rest of the group. About 15 hours later after perhaps the most uncomfortable ride of our lives, we arrived in Denver where we split to go to our respective homes.

It’s still hard to believe it’s all over – a journey of over 7,000 miles has come to an end. Stay tuned for some trail reflection and triple crown overviews and highlights in the next week.

We just finished the Continental Divide Trail and with it the Triple Crown of Hiking. Check us out on Instagram and Facebook to follow the next adventure.

← Rise and Grind – 300 Montana Miles in 10 Days on the CDT
Thruhiking the Conti D: An Overview of the Continental Divide Trail →