A Day on the Ice – Hiking atop Laughton Glacier in Alaska 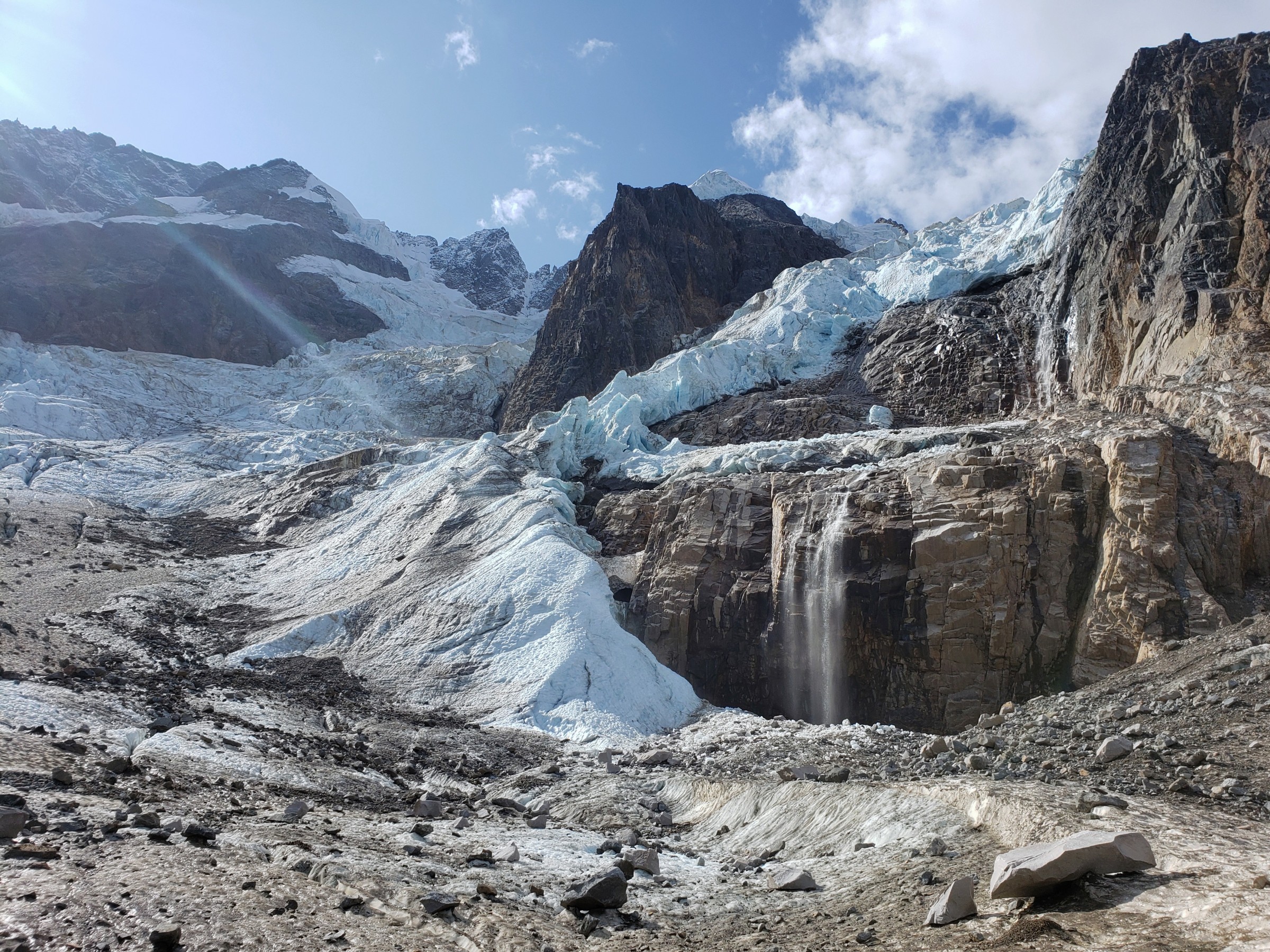 This summer, Sean and I have been guiding bicycle trips in Skagway, AK. As part of the tour, we make a stop at Bridal Veil Falls. There our guests line up to get their photo taken in front on the gorgeous waterfall and stare at the Laughton Glacier Valley on the opposite side of the highway. I’ve seen the valley literally hundreds of times driving guests up the mountain and cycling down and have explained just as many times how this stunning valley was carved by the Laughton Glacier. During the Wisconsin glaciation period, glaciers covered the mountains in this region carving and filling the valleys with a sheet of ice nearly a mile high. On tour, I point out the round U-shaped valleys as evidence of past glaciation. Glaciers are moving bodies of ice that are incredibly dense and distribute equal amounts of pressure on all sides. Anything “rounded off” would have been below the ice, and any jagged, sharp peaks at the tops of the mountains would have been above the ice. Over 10,000 years ago, the Laughton Glacier once filled this stunning valley. I note that it still exists between the mountains just out of view from this vantage point.

It’s both a rare and beautiful opportunity to have a day off with perfect weather here. Somehow, we lucked into a stunning day and didn’t waste our chance. Whether you’re going solo or on a guided trip, the only way to access the Laughton Glacier is by train. We grabbed our train tickets on the White Pass & Yukon Route, excited for the following day. We had an 8:00 am departure and had to be back to the “Glacier Railway” stop by 4:05 pm for the ride back to town.

At 8:00 am, we were on our way riding the scenic and historic railroad, Skagway’s claim to fame. The familiar narration played on the speakers as we sat back for our enjoyable train ride. We watched as tourists gawked at the valleys we call our summer home and even answered a few of their questions. At this point in the season, I know this area like the back of my hand, but I try not to forget how indescribably beautiful this place is and how elated I was to see it for the first time.

Our hour on board was soon over, and we made the stop for Laughton. Only four other independent hikers got off at the stop with us and maybe a dozen or so others on guided trips with Packer Expeditions. Once the train pulled away, we were off down the wooded four mile trail that would take us to the glacier. 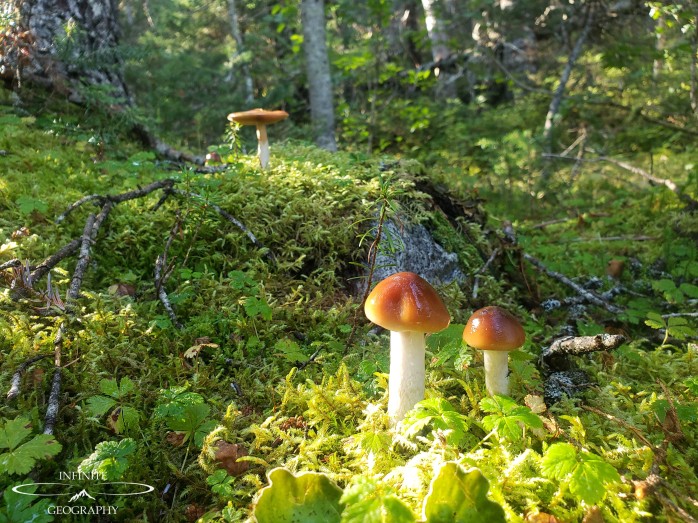 As we entered the forest and hit the trail, that feeling of home hit me – familiar smells, crisp air, following Sean’s footsteps. Evidence of the dwindling summer was still around us in the form of perfectly ripened blueberries, the offerings of an all too generous forest. But the first few stages of fall had begun which in this area brings whimsical mushrooms in all shapes, sizes, and colors. Tickled by their beauty and intricate shapes, I took the time to document them as we walked through the woods.

After about 2 miles of hiking, we saw a sign for the Laughton cabin and decided to check it out. The cabin can be reserved through the National Forest Service and can sleep six. It looked simple but cozy including a couple bunks and wood burning stove inside. We set off again down the trail and caught our first glimpse of the mighty glacier through a clearing of trees, the ice clinging to the tops of the peaks and spilling down the mountainside. Soon, we were leaving the forest and walking through shrubbery adjacent to the Skagway River as we finally approached the Laughton Glacier.

We approached the “termination point” of the glacier which looked like a cave of ice towering over my head with deep blues that pulled me in like a moth to the flame. At this point, the trail breaks into various smaller footpaths that fragment and end. From here, you travel on the ice at your own risk. 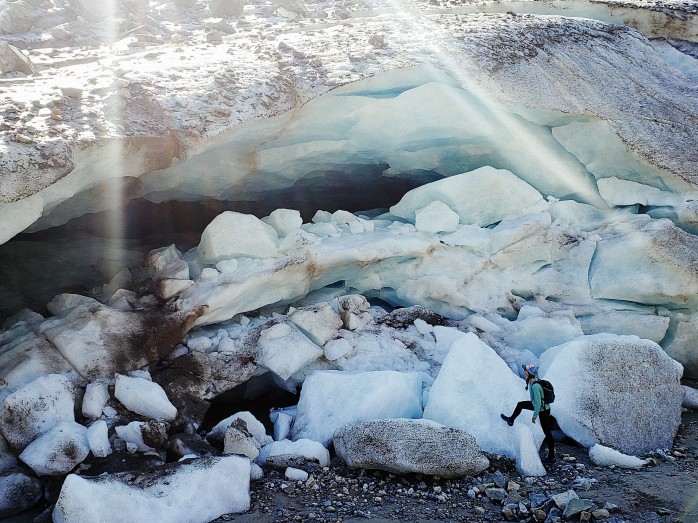 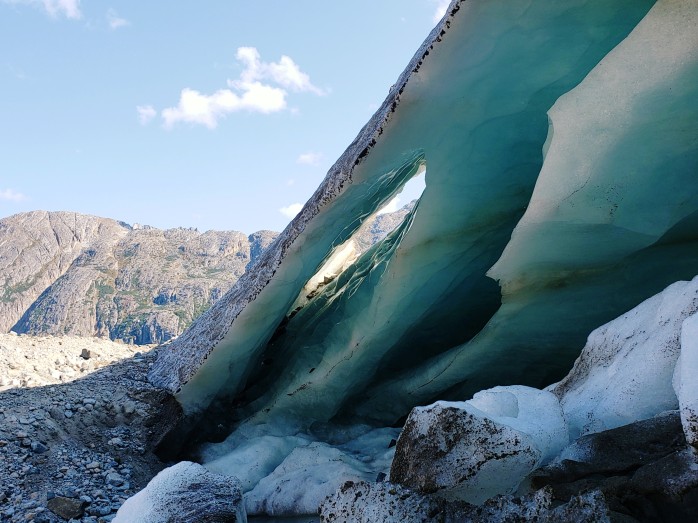 We decided to walk on the right side of the glacier. It took us a few minutes to realize that we were walking on ice as it was covered with dirt and rocks. We walked on for the better part of an hour being sucked in to the wall of ice ahead of us. We hadn’t seen anyone once we started walking on the glacier, thus we were able to take in our surroundings completely alone. We found a good view spot to take a break, eat our picnic lunch, and drink some coffee. Not surprisingly, it was colder on the ice than it had been back in the woods. After our break, I just couldn’t shake the urge to walk further so we layered up and continued.

Various waterfalls came into sight as we marched around the ice. We started noticing crevasses, none too large we were afraid of, but we were sure to make wide girths around them and, of course, not risk any sketchy jumps. Thankfully, this is a good time of year to walk on the ice as there was no snow hiding the crevasses (cracks) and moulins (holes or wells) in the glaciers.

At this point my feet were automatic, uncontrollably moving towards a massive waterfall whose water disappeared into an known depth behind the wall of ice. I stepped as close as I dared to peak behind the ice I was standing on, but couldn’t look into the depths. We had reached the end of the glacier before it started climbing vertically up the mountain. Sean noticed huge chunks of ice that had tumbled from the glacier far above, and noted we shouldn’t linger in this spot too long. 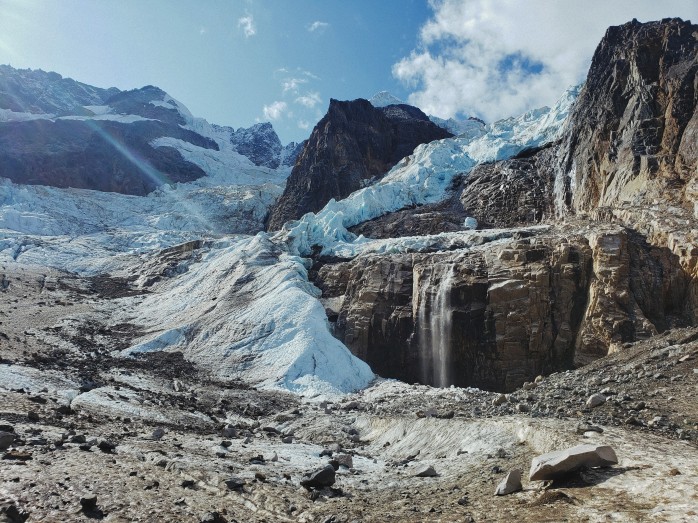 From here, we started heading to the opposite side of the glacier, taking in the giant from all angles before heading back down. We had a close eye on our watch and our time was slipping through our fingers. We came to a flat rock and decided to take a few minutes to take it all in before we had to start making our way back to the afternoon train. 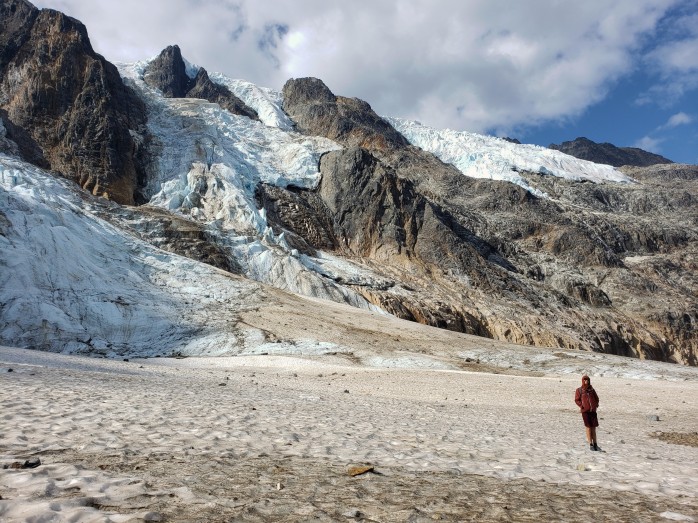 In this moment, we let nature’s wonder fully wash over us. We sat together sharing the moment solely with the mountain and the ice. The site of a glacier is nearly overwhelming, but the sounds of the glacier create a multifaceted experience. Cracks, moans, and sounds of rocks tumbling down the mountainside reverberate and disappear, their location perpetually unknown. In this moment, I had never felt so small, so insignificant as compared to nature’s sheer display of size and power. 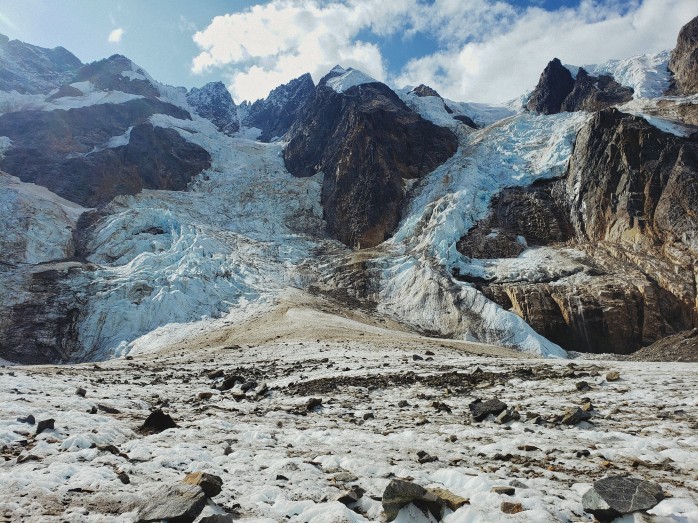 In John Muir’s several Alaska expeditions, it was the glaciers that called him in and to them he continued to return. He referred to glaciers as “a journey through time.” Now, in its mighty presence, I understood their pull. Glaciers are hard to understand without experiencing them – without seeing them spill down mountainsides, witnessing their valleys, and hearing their sounds. Looking back towards the valley, there is a distinct line between a pile of rocks going down to the ice and a line above where topsoil has returned and trees have regrown. In this division, you can see the past and how it has shaped the present.

It was time to retrace our steps, though we didn’t do the greatest job. We headed back towards the valley in a slightly different way seeing more and larger crevasses. We did our best to keep calm, knowing we weren’t lost but hoping we weren’t walking into dangerous territory. We were better than half way back when we saw people for the first time since leaving the woods. A guided tour was to our right, giving us a comforting sense of security. We passed the group as their guide was showing off a huge moulin. The massive moulin was around 8 feet wide. The guide chucked a few rocks in the hole, paused, and counted the seconds to hear it crash. I heard him comment that we were standing on a couple hundred feet of ice.

Soon, we found the termination point of the ice where this journey had begun. Gratefully, we were reunited with the trail that would safely take us back to the train stop. We sat once more, getting our final glances at the ice we had seen, touched, heard, and forever humbled us.

We walked slowly down the footpath knowing we had plenty of time to catch the train. I intentionally set aside a half hour for blueberry picking and admiring the beautiful mushrooms along the way. We filled a quart sized container and continued down the trail. We had about 20 minutes to sit before the train came down the tracks.We got on board the full train car, and reflected on our hike throughout the hour train ride. 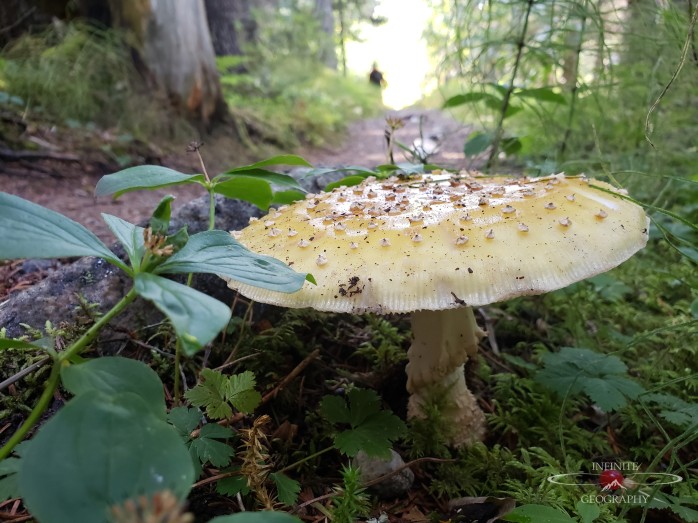 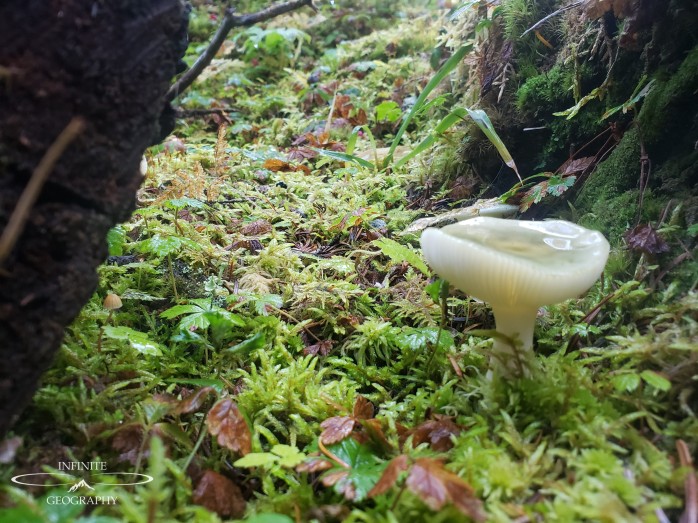 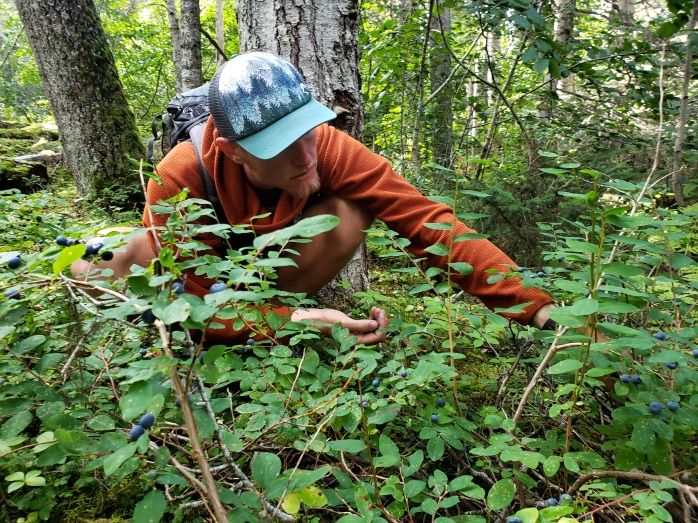 This day was a gift, a most memorable and humbling experience spent on the ice. I’ve been blessed to see many of this planet’s varying landscapes, but none have shook me like the glacier. Knowing that most of the earth’s glaciers are receding, I feel eternally blessed that I was able to see one of Alaska’s glaciers at all. If you haven’t yet, make your plans to experience the sheer power, beauty, and magnificence of the world’s glaciers while they’re still around.

We are Bekah and Sean, outdoor enthusiasts and current bicycle guides in Skagway, AK. We’ve been living the nomadic lifestyle for about six years with various seasonal jobs and long distance hikes in between. Our next adventure begins soon with our first long distance bike ride down the west coast. Follow our journey here, on Instagram, or Facebook.

← Work and Travel: Life as a Bicycle Tour Guide in Alaska
Hiking the Historic Chilkoot Trail →