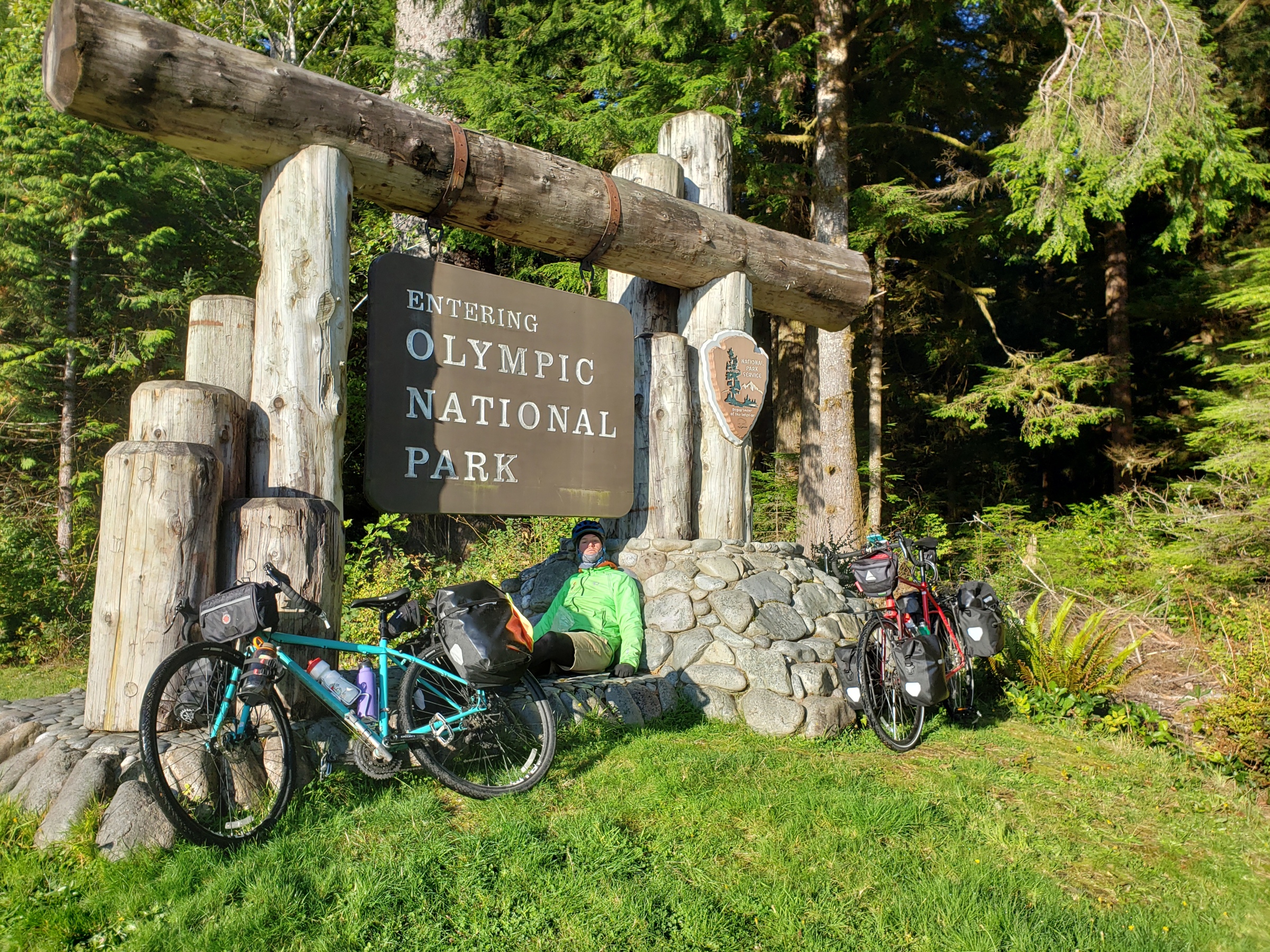 It was pretty bittersweet leaving Skagway, our home in Alaska for the summer, but the time had come. We put our boxed bikes on the overnight ferry and headed towards Juneau. In the morning, we arrived about an hour later than expected but still managed to make it just in time to check the bikes and board our flight to Seattle.

Upon arrival in Seattle, we headed to baggage claim to grab the bikes, found a quiet corner, and started assembling the bikes that our friend Nora helped us box up just two days prior. Thankfully, we managed to get the bikes together ourselves, a grand achievement in my book.

The next step was to boldly take to the busy Seattle streets as if I knew what I was doing. We attached the bags, strapped on helmets, and were off. Since we had a long travel day, we brought ourselves to the Seattle ferry terminal about 14 miles from the airport. Cars buzzed around us as we carefully meandered the busy downtown area, but in about an hours time, we had arrived at the ferry. We boarded with a big bicycle gang and were off towards Bainbridge where we’d spend the night in a cushy suite.

We woke up well rested and had a few morning errands to take care of before hitting the road. Our friend and coworker, Caleb, recently moved to Seattle from Skagway and wanted to accompany us out of the city. We met up with him and began our ride. Our destination for the night was Port Townsend for accommodations at a friend’s parent’s house.

Leaving Bainbridge was mostly highway riding though we did a few cuts through neighborhoods and back roads. The fauna of the rainforest surrounded us – big ferns, blankets of moss, towering trees. We took a lunch break after about 30 miles of riding and said goodbye to Caleb before continuing north.

Nearing Port Townsend, we stopped at a roadside farm stand full of fresh, local veggies and Washington made products. We loaded up and headed to the house for a super cozy stay on the farm. (Thanks again, Keely!)

We started our day pretty early leaving Port Townsend and heading west around the Olympic Pennisnula. It was cloudy, but dry. Soon, we linked up with Highway 101 and began riding on the shoulder. Not too far into this ride, we realized there was an adjacent bike path called the Olympic Discovery Trail. We switched to the paved bike path, grateful for a dedicated lane away from traffic. A quick google search informed me that the trail stretches nearly 100 miles west to Forks where the 101 heads south. Score.

We stayed on the Olympic Discovery Trail (ODT) all day stopping in Sequim for lunch and a quick stop in Port Angeles to take in the scenery. For most of the day, the trail was paved and very well maintained. It was a series of small hills but nothing too difficult despite some short steep sections.

Our friend Dan had mentioned a free stealth campsite on the shores of Lake Crescent. We weren’t sure we would make the 75 miles earlier in the day, but with only about 12 left to go at 5:00 pm we thought we could make it.

Leaving the tiny town of Joyce, we started relentlessly climbing up and up at a slow and steady pace. At some point, the trail turned from a road onto the “Olympic Discovery Trail Adventure Route” for a short stretch. This section of the ODT is single track designed for hikers and mountain bikers. Knowing it was a short section, however, we gave it a try.

I have no experience mountain biking, so this 2 mile section filled me with doubt and anxiety as I meandered rocks, roots, divots all while next to a pretty big cliff drop off on my right side. I couldn’t have been happier when those two miles were over. The trail opened up to a wide gravel road and sent us downhill at a fairly steep grade.

Our final 6 miles were mostly flat gravel road with a final section that was footpath and bike path only around the beautiful Lake Crescent. As the sun was setting, we found Dan’s secret stealth campsite and setup for the night, exhausted and proud of our big day.

We started riding at about 8:00 am continuing on the ODT. We rode the trail nearly 30 miles until we rejoined the 101 about 10 miles east of Forks. We got to town at about lunch time and stopped for a rest. 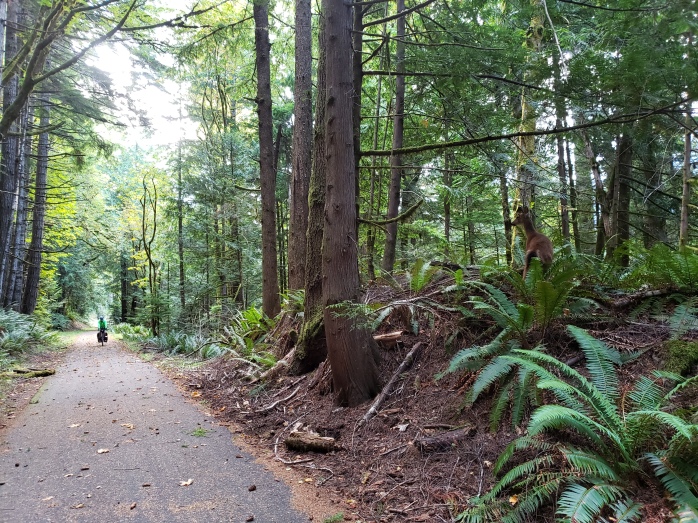 My energy level was pretty low, so I researched a campsite near town. The app iOverlander has been super helpful finding campsites along this journey. We found a spot for $5 on some private land about 15 miles out of town and headed there for the night. We put our money in the honor box and setup camp right on the shore of the Hoh River.

We got a slow start as the temperature was around 40° to start out the day. Even though you’re doing physical activity on a bike, the cold weather freezes your toes until your pedaling with blocks of ice instead of feet. We began our ride, taking breaks along the way to thaw.

We rode in and out of Olympic National Park and Forest enjoying the coastal temperate rainforest flora. Soon, we got our first glimpse of the Pacific Ocean at Ruby Beach.

The 101 does not stay coastal for very long in Washington and soon we followed the highway inland. We knew that there weren’t many towns throughout this stretch, so we rode long segments without many breaks. The scenery changed once we exited the forest to patches of trees mixed with bald spots. This area is dominated by the logging industry. It wasn’t particularly scenic so we just settled into some podcasts and peddled the day away over very mild terrain. We stopped after 80 miles at a stealth campsite outside of Hoquiam. 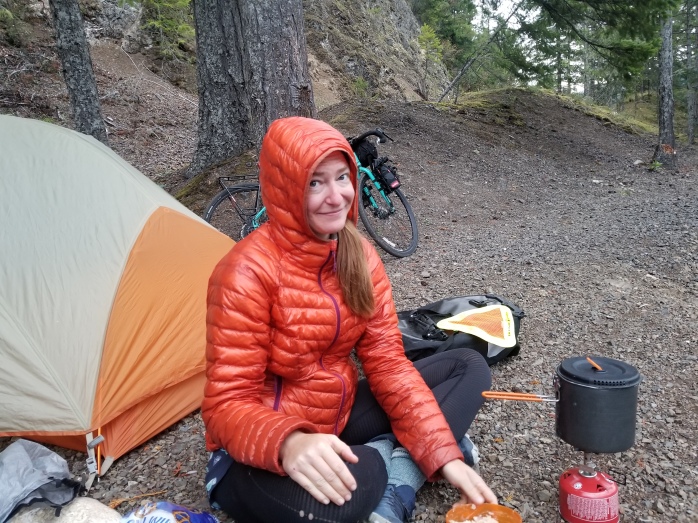 This was a particularly brisk morning. We packed up camp but felt pretty unmotivated to ride in the cold. Since we were just outside of a town, we rode until we found a spot for coffee and dawdled around until it was warm enough to be on our way.

While killing time, I check the website Warm Showers (think couchsurfers for cyclists) to see if there were any hosts for the night within a good distance. We found a lovely couple who lived on a farm in Bay Center and put out a message to see if they could accommodate us that evening.

We stopped at a grocery store in Aberdeen for lunch and food for dinner. In the mean time, Paige had messaged me welcoming us to her farm for the evening. We took off from Aberdeen excited for our first Warm Showers experience.

Leaving town we encountered the biggest hills of the trip thus far, every hill top seemed to be the bottom of the next hill. After several hours of climbing at about a 5 mph pace, we took a break in the small town of Raymond leaving 15 miles to our host’s house.

At about 5:30, we arrived at Paige and Hugh’s farm and were warmly welcomed into their home. We met all six of their friendly dogs and were shown to the trailer where we would spend the night warm and dry. We spent several hours chatting and swapping stories before heading to bed.

In the morning, we only had about 30 miles ahead of us to get to Astoria where two of our best friends live. After breakfast and many thank yous, we headed out down the 101. After a lunch break, we arrived at the Washington side of the 4 mile bridge that spans the Columbia River. We had heard the bridge is narrow, has no bike lane, and traffic whizzes by at 55mph. I was pretty anxious about this crossing to say the least.

We decided to take a break at the rest stop before the bridge. Out of nowhere, our previous night’s host said hello. Hugh had just crossed the bridge in his big pickup truck and quickly offered to drive us across the bridge.

We weren’t really sure how to feel about the offer. On one hand we wanted to ride the 101, that’s kinda the name of the game. On the other, I’d like to finish the trip alive and well. After some hemming and hawing, we ultimately decided to take the ride and play it safe. Once we were in the truck and on the bridge, we realized we made the right call. There’s no room for bikes on this bridge, and while we probably would’ve made it over safely, the amount of anxiety and stress I would’ve been under during this section was thankfully avoided.

We thanked Hugh once more for all of his help and entered Bikes and Beyond to get our bikes tuned up for the many miles ahead. After a few moments, my dear friend, Cassidy, entered the bike shop. We left our bikes with the mechanic and headed to her house excited for a few days of relaxing and catching up ahead of us.

We are Bekah and Sean embarking on our first long distance bike ride down the west coast. Follow along the journey here, on Instagram, and Facebook.

A view from Aspen Highlands back when the world made a little more sense. The value of the words "safe" and "predictable" has risen exponentially. At many points in my life, they were words I would've run away from seeking "thrill" and "unknown." Now I'm ever so grateful to have a safe place to be while we all wait this out. ▫️ May you all be blessed with health, safety, and patience as we navigate these trying times. 💜
That Aspen good good ⛷🏔
Today I took a ride in a snowcat at T-Lazy-7. It was such an amazing way to see my backyard for the winter. I'm feeling incredibly grateful for this new chapter in life and the chance to live in a Colorado winter wonderland ❄❄❄
I left my bike in a box and my heart in Alaska 😔
I had no doubts, but thanks Becca and Kyle for making the six and a half hour drive totally worth it!! A break in training in Aspen gave us a couple days off and not much to do, so we drove to Park City to see our friends which included my first time riding single track and my first time riding a fat tire bike (SO fun!). We also ate at a dank vegan restaurant in SLC, saw David and Katie Polakoff, checked out a brewery, and bought skis (!!!) for the winter ahead. And of course, Bex and I beat the boys at Euchre obvi. So much dopeness. Love you guys and happiest of birthdays to Kyle 🥰🚵‍♀️ @kakakyle @beccabauer141 @katiepolakoff @dpolakoff26
Psst... we made it!!! Seattle to San Francisco ✅ Full story on InfiniteGeography.com (link in bio) 🚴‍♀️🌎🚴‍♂️ #westcoastbiketour2019
%d bloggers like this: