After eight days on the sea, we were happy to reach land in Cartagena, Colombia. After locating a hostel, we took a night stroll in the Old City. “Wow, this place reminds me of Madrid.” Well, there’s a good reason for that. Cartagena was, in fact, colonized by Spain. The city has remaining walls of defense and cannons bordering the Caribbean. Inside the old city are many bustling streets filled with colorful buildings, many street vendors, performance artists, massive cathedrals, and museums. In total, we spent 5 days enjoying all the city had to offer.

One of my favorite spots was the Museo del Oro. The museum features gold artifacts and teaches about techniques of ancient goldsmiths. For example, the earrings pictured below were created using the bees wax method. Goldsmiths rolled beeswax into thin strips which they weaved together to create different patterns. In this case, the goldsmith would do his best to create two matching designs. The beeswax patterns were then put into a clay vase like mold, and the mold was put into a fire to harden. When the clay was set, the now liquid beeswax was poured out. Molten gold was poured into the space created by the wax and the clay vase was returned to the fire. After the vase was removed and cooled, the clay was chipped away leaving beautiful, intricate gold earrings. 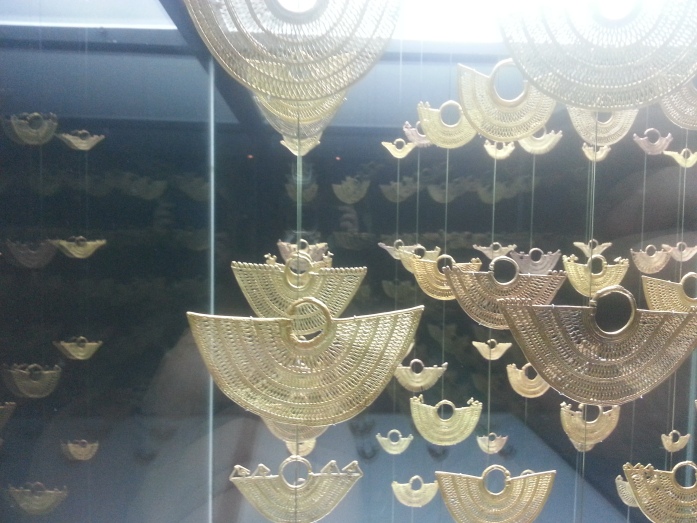 Most of our days were spent wandering the city streets and admiring the beauty of the city. I’ll let the pictures speak for me…

Another of my favorite parts of Cartagena was the availability and quality of the street food. My favorite, a Colombian classic, was the arepa. Although they vary throughout Colombia, arepas in Cartagena were like homemade biscuits sizzling on a griddle. When ordered, they were cut in half, slathered in butter, and stuffed with a sharp parmesan like cheese. We spent some time hunting down our favorite a-rap-ist… 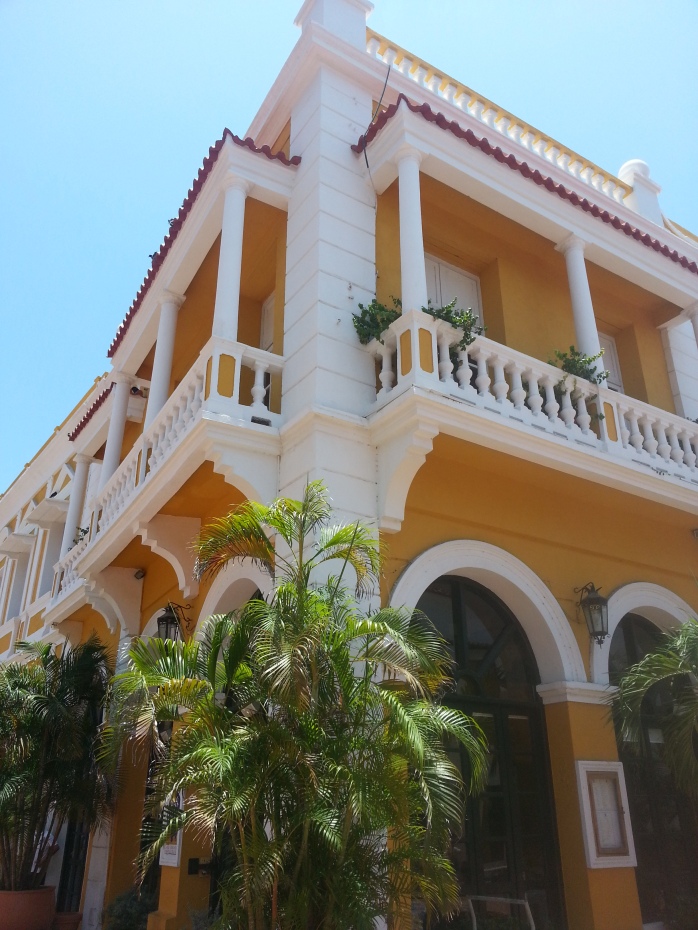 It was time to continue Southward, so Saturday night we took the overnight bus (95,000 each) to Medellin. When the morning light arrived, we were surrounded by beautiful mountains and the city began to come into view. A huge city.

We made our way to Barrio Poblado and checked into a hostel. Bonus – all you can drink Colombian coffee and hot showers! We felt like royalty. For the record, drinking coffee straight from the source is like no other. Might be more than coffee in this coffee…

We spent the first night in Medellin on the salsa dance floor and I fell in love with dance culture – which we really don’t have in the States.

The next few days we spent enjoying the city. We visited a botanical garden (which is a little lackluster after spending the night in the jungle 😉 ) and viewed the sculptures downtown. We also enjoyed the Museum of Modern Art which contained a large exhibit of drawings and animations by one artist. While in the city, we also took advantage of the cable cars as a cheap way to overlook the city. 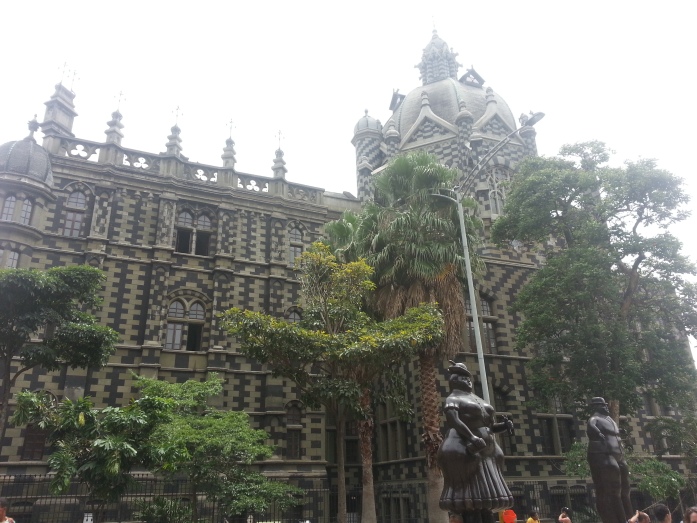 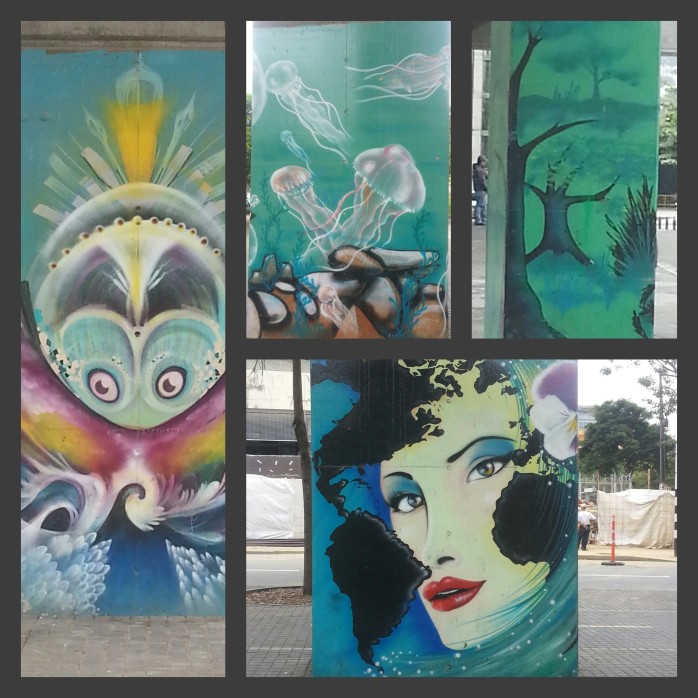 On Wednesday, we took a bus to Guatape to visit La Piedra, a huge rock jutting out of the Earth. 10 mil and 740 steps gets you to the top where you are rewarded with breathtaking views of the mountains and surrounding lakes. Our favorite part of Medellin was actually leaving Medellin. 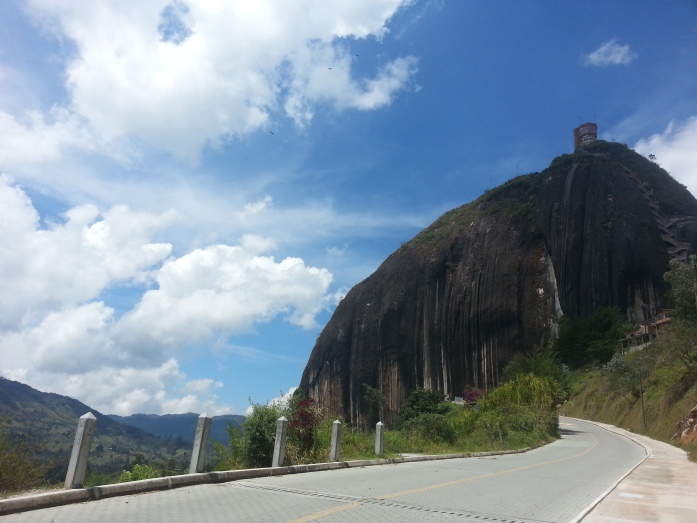 After the climb, we walked to the colorful town of Guatape. All the building are beautifully decorated with all the colors of the rainbow. From Guatape, we grabbed a bus and headed back to the city.

On our last night in Medellin, we decided to spoil ourselves and went looking for a nice spot for dinner and drinks. We checked some menus, and at one place we were handed a card soliciting their all you can drink cocktail special. With the card, 2 ladies could drink for the price of one. So for 20 mil (about $10 US) we drank as many mojitos as we wanted. Probably the best drink special ever.

So far, Colombia has been one of my favorite countries we’ve visited. However, us country girls were really ready to leave the city life. After some research, we found the next destination.