Leaving Cusco, we took the overnight bus to Puno which arrived at about 4 am. We killed a couple hours at the bus terminal and grabbed a cab to Bothy Hostel we saw online. They graciously allowed us an early check in and we got a little rest.

That afternoon, we went out for lunch and got caught in rain and hail. We grabbed some snacks and decided to take advantage of the hostel’s movie room. Tv was kind to us, and we happily watched Toy Story and Harry Potter in Spanish, of course. Counts as a lesson, right? “A infinitivo, y mas alla!”

The next day was full of sunshine, and we made the ten minute walk to Lake Titicaca.

Puno doesn’t really have much in terms of attraction other than the lake. And really cheap food. We enjoyed ceviche for lunch for about $1. 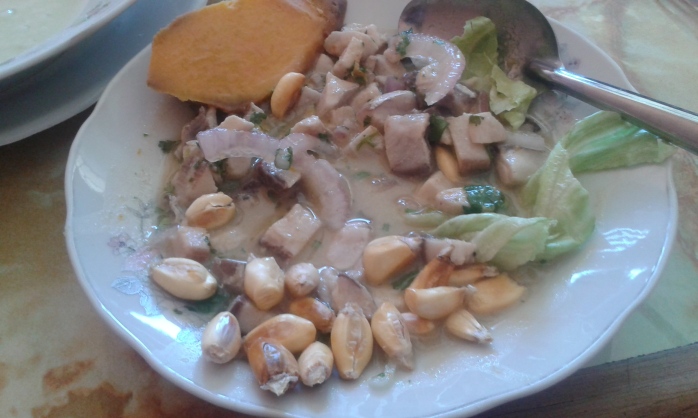 The next day, we considered taking the tour to the floating islands but didn’t love the tour packages options. We instead opted for hiring a small private boat to just take us on a lake stroll.

We ended the lake tour at a boat museum. This large boat was brought in piece by piece shipped from London to Lima and hauled by donkey over the Andes to Lake Titicaca. Amazing.

That afternoon we unintentionally landed in a parade! We were in awe of the intricate costumes. 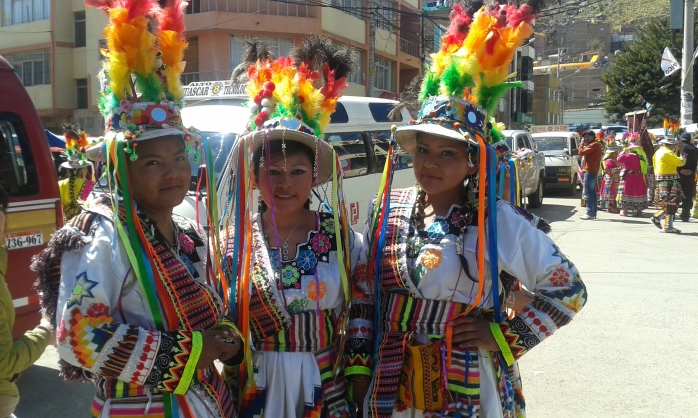 That evening, we took a night bus from Puno to Arequipa. We were happy to be back in warm weather!

We took a cab to a hostel and checked in. We didn’t love it there (especially with a lack of kitchen), so we switched hostels the next day and inadvertently spent 2 weeks in the city. Easy to do in a cheap city surrounded by mountains and every day is 70° and sunny.

Surprisingly, Santa Catalina Hostel has been the best bang for its buck hostel that we have encountered on the trip. S / 20 each for a private room, shared kitchen, shared bathroom with HOT water, functioning Wi-Fi…

We’ve been taking our days real easy in this city. Lots of reading, sleeping, beers. We even got adventurous and cooked up some coy… that’s guinea pig. It wasn’t very good…

On Halloween, we did the appropriate thing by visiting Juanita, a five hundred year old Inca mummy. The ice princess was an Inca sacrifice slain in the Andes as an offer to the gods.

We haven’t been doing… much… which has been pretty wonderful after a lot of traveling.

Well, eventually, we broke our streak and decided to head South. We’ve got a little over a month left and very few plans. Let’s see where the road takes us…

2 Comments on “Puno and Arequipa”