From the Great Basin to the Wind River Range: Experiencing Wonderful Wyoming

After 12 morning miles through the desert, we arrived in the small city of Rawlins, WY eager for a little R&R after the 150 mile stretch from Steamboat Springs. We lucked into a very early check-in with our friend, Foundation, went to the grocery store and didn’t leave the hotel room for the following 24 hours. It was awesome.

When morning came, we put off our departure back into the Great Basin. We were about 120 miles from the tiny town of South Pass City were our next resupply was waiting for us. On our way out of town we caught up with three other thruhikers – Hyrobics, Gasket, and Gusha, and we were easily talked into $1 beers at a local bar. After a few rounds, the six of us decided to head out of town and get a few evening miles in. After 12 miles, we called it for the night near a spring.

We were the first to head out of camp as the sun was rising the following morning, but the group wasn’t too far behind. Since the water sources are 10-15 miles apart in this section, all six of us traversed the basin more or less together spreading apart while walking but rejoining at the few springs available. There was no shade and little in terms of scenery other than sand, sagebrush, cows, and endless amounts of sunshine. We all decided to push hard to put the basin behind us. 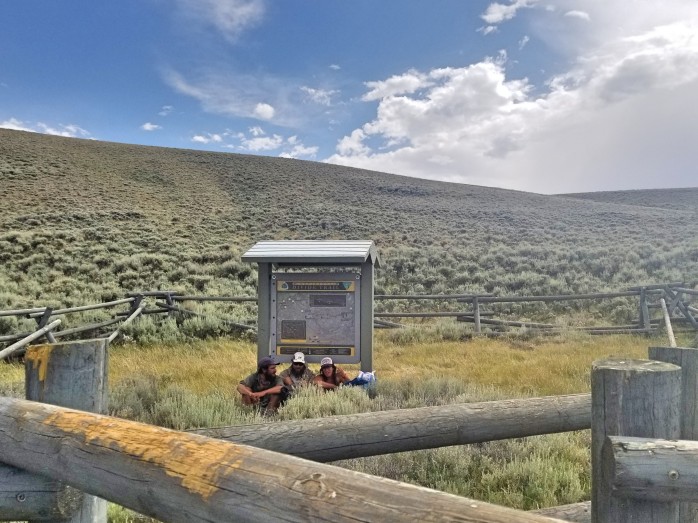 Three days melted into what seemed like one very long day as we walked through this very barren stretch of land. We hiked just over 100 miles in the three days after we left Rawlins and arrived in Atlantic City just 4 miles away from South Pass City. We spent the night in the tiny town of Atlantic City where the town was preparing for South Pass City’s annual Gold Rush Days festival. This year was additionally South Pass City’s sesquicentennial (150 year anniversary) and all 50 people that live in Atlantic City were buzzing. We joined a small group of locals at a bar that had a tee pee outside and a group of kids shooting off fireworks. We were given permission to sleep in the tee pee and slept despite the fireworks (some of them VERY low) that were being shot off just 6 feet away. In the morning, we hiked the four miles to South Pass City and began waiting a couple of hours for the business to open that had our resupply box. During our wait, a local trail angel that knew Gasket offered us showers and morning beers. Not a bad way to start the day. (Thank you, Sandy!!) Soon we were able to get our box, but we realized that neither small town had much in the way of groceries to add to our resupply. We were 165 miles from our next stop in Dubois, and we definitely didn’t have enough food to make it that far. Soon we all decided that we’d have to sacrifice this day of hiking to go to the much larger town of Lander about 35 miles away. We hiked about four miles to the highway and caught a ride to town.

Once in town, food dreams came true and the day flew by. Half of the group got a room for the night, and we were fairly easy to persuade to stay too. We got all our chores done, packed 6 days of food away, and enjoyed a night’s sleep inside for once. In the morning, we hitched back to the trail and were happy to arrive by 8:30 am with our packs fully loaded. Our friend, Tabi, lives in Dubois and graciously offered us accommodations. We had been dreaming about this stop for miles now and were very eager for a zero day knowing this 165 miles would be trying.

We hiked out from the highway still in the Basin, however, we were approaching the mountains we had been seeing in the distance for days. Soon, more and more trees surrounded us and streams and creeks were everywhere. We were thrilled to be leaving the desert once again and head to higher ground. We only brought enough food to hike for 6 days meaning each day needed to be at least 27 miles. We put in a good 28 from town and retreated to our tent quickly as a new trial encroached – mosquitoes.

We were glad to wake up in the forest that morning though the mosquitoes were very quick to find us. We decided to head out of camp with Foundation and Gusha on a popular CDT alternate – the Cirque du Towers – adding a little extra climbing to our day. After a little bushwhacking to find the trail, we took off into a beautiful meadow and began hiking up to a high pass. We were all blown away by this new contrasting environment from the previous 100+ miles of hiking. I had several moments of disbelief as a gazed at the scenery surrounding me. We had made it into the highly anticipated Wind River range, and we were far from disappointed. 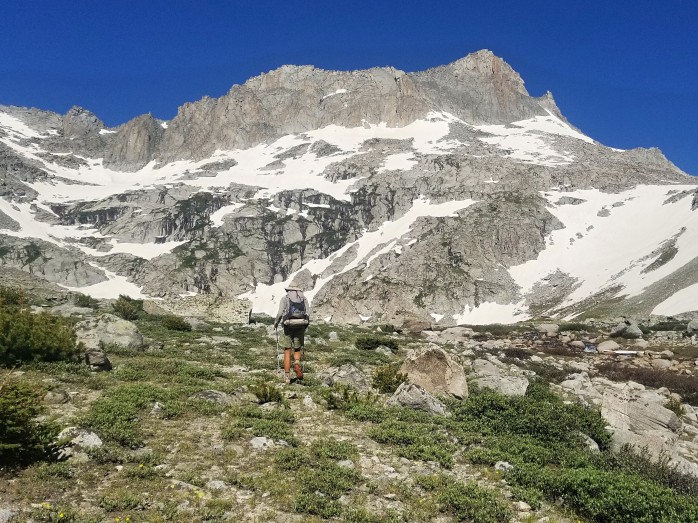 Sean and I found ourselves pretty beat after the first pass and decided to make our way back to the CDT route on gentler terrain. We still managed to put in 27.6 miles before pitching our tent for the night exhausted. 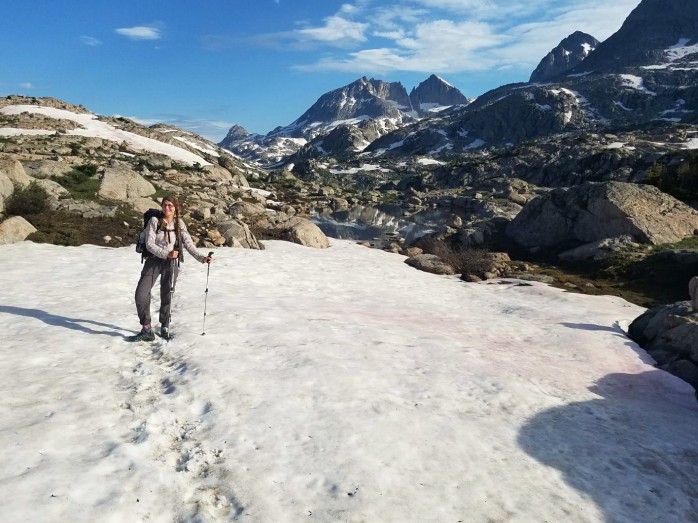 The next day we continued on through the Winds which left us completely speechless. The views here are rivaled by that of the High Sierra, and only those who have been there can really understand the gravity of such a comparison. In this country’s wilderness areas are truly where the greatest treasures are hidden. Bridger Wilderness Area quickly became one of my favorites I’ve been lucky enough to see – mountains bursting with crystal clear water gathered in jewel toned glacial lakes; 100 ft waterfalls cascading majestically down mountains; cliffs climbing to the sky like spires on cathedrals; millions of wildflowers in a myriad of colors. It was clear that we were walking through a sanctuary, a temple, a divine and holy place.

Though the terrain challenged us, the reward was completely worth the effort. We pushed on day after day and mile after mile simply in awe and disbelief. Our biggest trial became the mosquitoes that were easily some of the worst I’ve ever seen – and I’ve been to the Amazon. Thankfully, we came prepared with bug spray and head nets, and we fared far better than some miserable hikers who were quite literally being eaten alive. 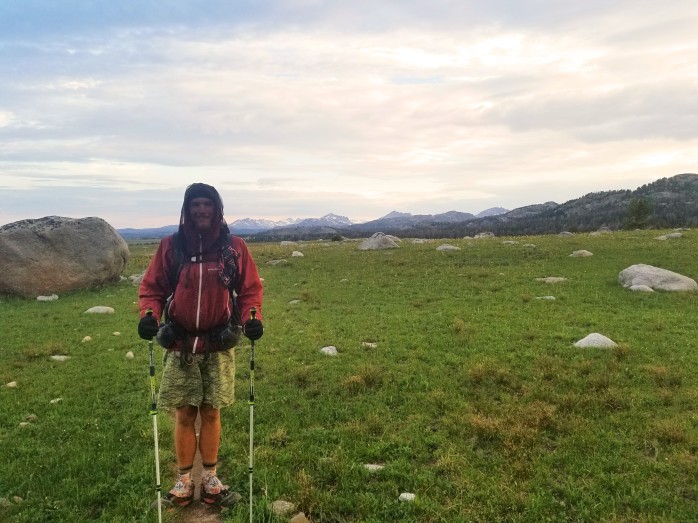 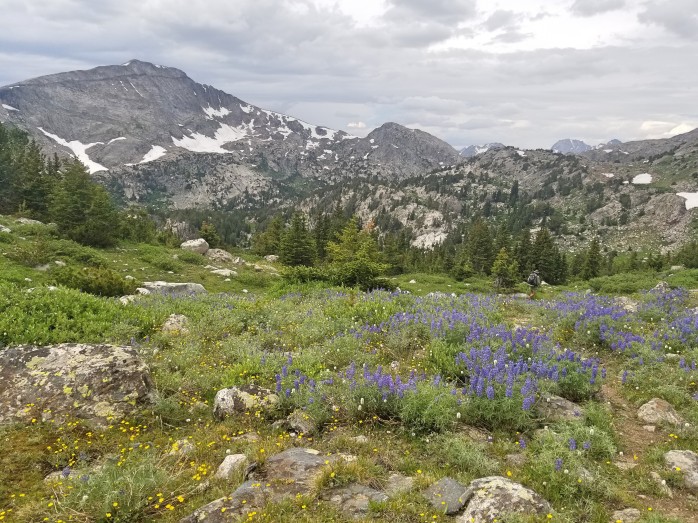 As the days went by and we neared town, our energy clearly waned. This was our longest stretch of backpacking ever without a resupply in between which meant carefully rationing our precious food supply. We are both completely ravenous at this point of the hike with food occupying about 90% of our thoughts.

Another new challenge of this section is the water crossing and frequent fords across streams, creeks, and rivers. It seems as though the fords are spaced apart just so that my feet get almost dry in between each one. Though most of the currents have been mellow, some creeks have been just shy of my waist line basically maxing out my abilities to cross without swimming. As such, our feet stayed wet for the better part of this stretch and we got the joy of putting on our wet socks and shoes every morning. 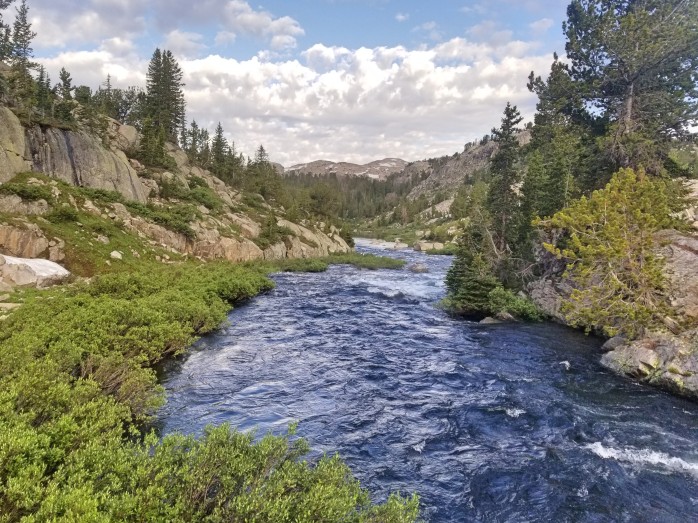 Our final stretch in Bridger Wildnerness area brought us by Green River which we followed down for several miles and several thousand feet of elevation to the Green River Lakes. We were saddened to put this incredible section of trail behind us, yet eager for the rest and food that town promised ahead. 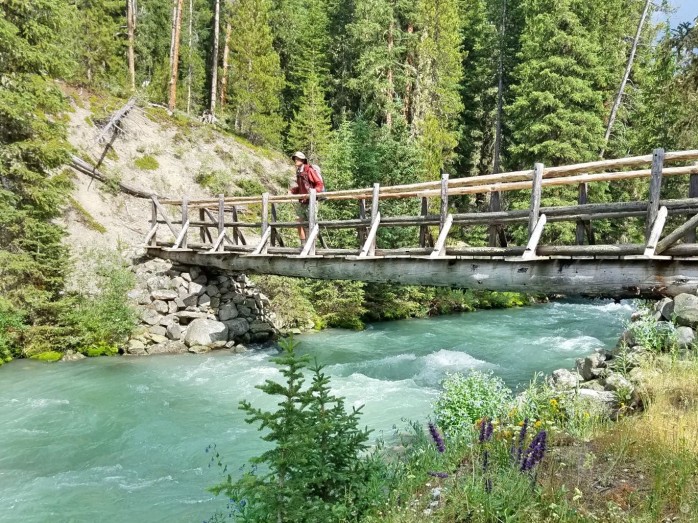 We camped near Green River Lake and exited the wilderness area the next morning. We pushed back to back 30 mile days to get us as close to town as possible leaving a half day to get us into Dubois. In the morning, we were halted by a herd of cows moving towards us on the trail. Luckily, a cowboy came by on horseback and directed us over to him putting himself between us and the herd. He explained that he and 5 other cowboys were moving 250 cows today into the meadows and another couple hundred over the next few days. We chatted with the cowboy for about 20 minutes while the cows moved slowly by.

After our delay, we finished our day walking quickly – desperately – to the highway to hitch to town. Though we had seen some unbelievable sights, our bodies were craving rest, relaxation, and calories. I continue to be impressed by the athletic accomplishments we’ve achieved on this trail, far surpassing our expectations. But, I sincerely hope there aren’t any more 165 mile stretches on this hike, unless I can ride this guy…

With our combination of alternates, we have walked 1600 miles from Mexico to Dubois, WY, leaving about 1000 to go to Canada! Follow along here, on Facebook, and Instagram as we hike north to complete our Triple Crown of Hiking.

← Changing Landscapes: Colorado into Wyoming on the CDT
“You Dropped Your Rainbow” – Enjoying Iconic Yellowstone on the CDT →

8 Comments on “From the Great Basin to the Wind River Range: Experiencing Wonderful Wyoming”