Day 4. It was chilly and drizzling leaving Mountain Crossings at Neal Gap. We had another foggy day of climbing up and down the ridge line in the Southern Appalachians. After 6 miles, we hit Tesnatee Gap where The Trail crosses a highway. A small group from another Baptist church was doing Trail Magic. They graciously handed out Gatorade, sodas, chips, cookies, and crocheted hats!

We spent the rest of the day hiking another 5.5 miles into Low Gap Shelter. The big word on The Trail recently has been Norovirus. What’s Norovirus? A true fear for hikers, Norovirus is a nasty bug that is caused by human waste infecting water sources. It is easily spread between hikers through shelters, dirty hands sharing food, and drinking from contaminated water sources. The bug is treatable but can cause gastrointestinal issues from both ends, simultaneously, for up to three days. No thanks.

Sooo… the telephone-like game that is primary communication on The Trail informed us that uh… evidence (ew)… of Norovirus had been found at Blue Mountain Shelter. Rumor had it that the virus was contracted from the water source at Low Gap Shelter where a privy was overflowing (eww). 11.5 Miles.

Day 5. We left camp at about 9. Foggy, chilly, and mildly miserable. I hiked a brisk 9.7 miles in the drizzle and fog. Trail Magic had been rumored and, again, came through. Another church group blessed us with big, juicy cheeseburgers. I nearly ran the last half mile upon smelling a grill. My fastest pace yet, actually – 9.7 miles in 4 hours.

Let’s be honest. I knew our hike was taking us to Unicoi Gap where we would hitch into Helen, GA, for our first night in a hotel. After we devoured a burger, Big Foot and I put on our smiles and stuck out our thumbs for a ride 9 miles into Helen. Luckily, a retired woman in a minivan with her slobbering pug pulled over and drove us into the small, tourist trap town. This woman was born and raised in Helen and watched the changes over the years. Helen has been turned German and proudly hosts one of the biggest Oktoberfests in the country.

Day 6. We left Helen in the morning and tried our thumbs again to get back to Unicoi Gap. A cop spotted us and pulled over. At first, I was concerned we were in trouble. However, he offered us a ride to the city limits. We had to sit in the back though…

We hitched the rest of the way with a man heading out for a day hike. When we arrived back at Unicoi Gap, we noticed The Trail had frozen overnight, and we quickly made our way down (actually up) the white blazes on this clear, bright and chilly day.

A surprise came around noon 4.4 miles in. Red Truck and Green Truck were holding their 13th annual Feed the Hikers weekend. These two former thru-hikers spend one weekend a year with their extended families camping, cooking, and drinking! These Super Angels shocked us with an incredible amount of food including eggs, hashbrowns, hot dogs, chili,  mouthwatering Southern pork bbq, soda, coffee, and BEER! We were blown away. 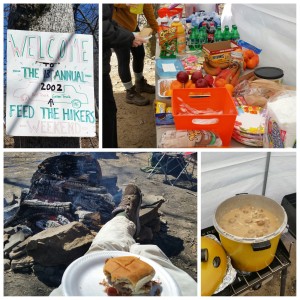 The rest of the day proved quite challenging up and down Tray Mountain. Camped at Sassafras Gap in 21 degrees! 10.4 miles.

Day 7. We tore down camp quickly in the cold – frustrated by my freezing finger tips. A short day of hiking led us to Dick’s Creek Gap where we relaxed in the warm sun. Sean’s cousin, Beverly, drove two hours from Chattanooga to bring us lunch and give us a ride into Hiawassee, GA. We grabbed a room at Mull’s Motel, showered, and nearly sprinted to the nearest restaurant with an all you can eat option. Sean and I, along with plenty of other hiker trash, smashed a fried chicken buffet called Daniel’s. I’ve had a little trouble with my right ankle swelling. A hotel room was worth the extra money to rest and keep ourselves out of the rain. 6.3 miles.

Day 8. Morning came, and we hitched back to pick up The Trail. 9 Miles in we hit our first milestone as we crossed the Georgia – North Carolina border. One State Down!!! North Carolina welcomed us immediately with an 800 ft climb over 2 miles. Beautiful, but strenuous.

During the last part of the hike, I passed The Bionic Woman, so named for her prosthetic leg. When she finishes, she will be the first female to complete the thru-hike with an artificial leg. Before her accident, she completed the Pacific Crest Trail and cycled across the country. Badass defined. 11.8 miles.

Day 9. We awoke to a beautiful morning and climbed the very well graded Standing Indian Mountain. Lots of hikers ended up at the same campsite. Guitar and campfire ended the day perfectly. 12.5 miles.

Day 10. Another beautiful day of hiking. We ascended the steep climb up Mount Albert and were rewarded with a lookout tower for 360 degree panoramic views. Another milestone – Mile 100 on The Appalachian Trail!! A few miles later, we arrived at our shelter for the night. Lots of hikers, some familiar, everyone eager for tomorrow. Nice weather, brilliant moon and stars after the colorful sunset. 8.6 miles. 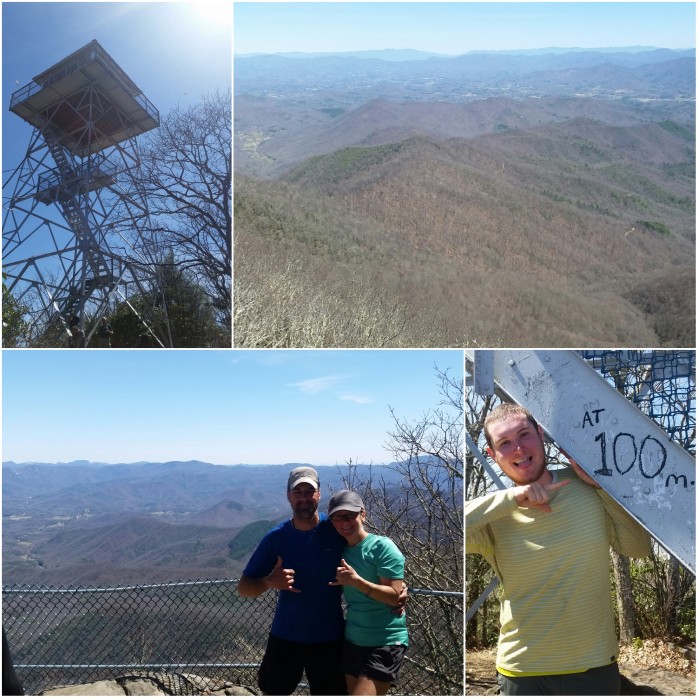 Day 11. We awoke early to  hike the 7.3 miles to Winding Stair Gap to hitch a ride into Franklin, NC. The drizzle and fog didn’t dampen our spirits too much as we were excited to eat a good meal and take our first zero mile day. Eager and impatient 7.3 miles.