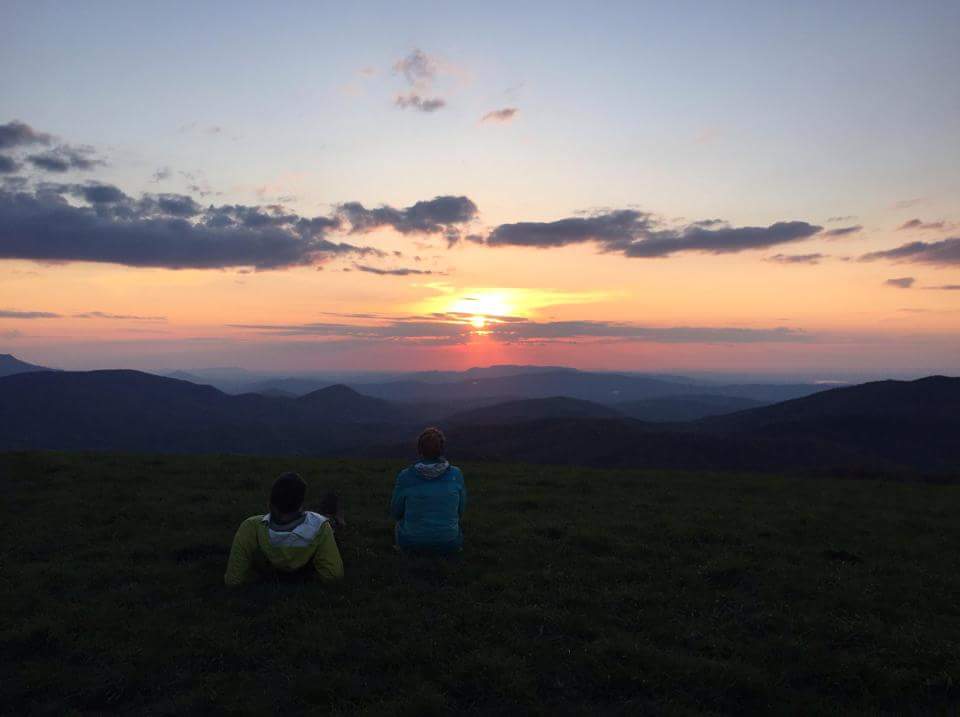 With all but a mile of The Smokies behind us, BigFoot and I planned our biggest day yet. Max Patch, a beautiful mountain bald with tremendous views, was 18 miles ahead, and we wanted to be there to catch the sunset.

Thankfully, we awoke early to the sound of other hikers packing up. We did our morning chores and hit the trail by 7:20!! A new record!!

The day began officially exiting Smoky Mountain National Park, crossing Pigeon River, and walking under I-40. Soon, we were back in the woods climbing the first mountain of the day, Snowbird Mountain.

After a long uphill battle, we reached the grassy summit that is topped with a Federal Aviation Administration (FAA) tower used for air traffic control. We stopped for a bite to eat and a short rest. We still had to descend this mountain and climb another.

So on we walked. Down, down, down all that we had ascended just to climb again. We took another break at the lowest elevation point at about 1:00. We still had another 9 miles to go for the day.

After our rest, we set out again. This time, up and over a hill, then the final steep ascent to Max Patch. Time was still in our favor, but our bodies were running low on fuel.

The beginning of the final ascent was a  brutal, steep start. With aching legs and heavy chests, we made the push up the hill. We knew the destination was now only 3 miles away, but the distance didn’t matter. When you’re this tired, hot, and hungry, no stopping point comes soon enough.

Yet, we still walked on.

Those last couple hours seemed to take an eternity, but soon we found a sign indicating that Max Patch was .8 away. With a new found bit of strength, we walked slightly faster.

We came across a stream and, thinking quickly, filtered enough water to cook dinner on the bald. What’s adding an extra pound each after 17 miles???

Soon, we exited the woods and were surrounded by a grassy field. The mountains in the distance were visible in every direction. We had made it to Max Patch.

Actually, when we arrived, it was just about time for the bride and groom to say their “I Do’s.” Yep, we walked right into a wedding held on Max Patch. And what an amazing venue to tie the knot.

When we reached the summit of the bald, my jaw dropped. The views from this spot have been unparalleled on our trek thus far. In every direction, the mountains proudly stood soaking up the sun rays that would sparkle for another two hours.

We happily joined our hiker friends, all as giddy as we were to receive such an amazing reward to complete this long, tough day. Soon, the hikers did their favorite thing: EAT!!! Though the mountain top dinner party was over,  the sun still had awhile until it would disappear.

Float surprised us when he pulled out his disc and began a mountain bald game of Frisbee. Somehow after all those miles, these hikers still had the energy to run after the disc for quick catches and cartwheel throws.

The sun began to sink lower and lower changing the color of the scenery in every direction. As the sun faded from yellow to orange to red, the mountains surrounding us showed a gradient of blues and purples. I didn’t know where to look. I stood slowly spinning to take it all in. 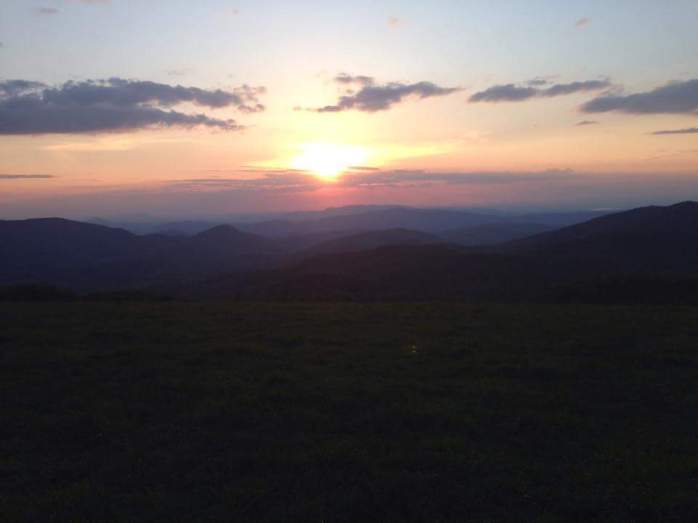 The group faced west to witness the sun disappear, when suddenly someone noticed something else in the sky.

Wow, what a gift. The full moon appeared in all its glory – rising to center stage as the sun left the scene.

With the sun down, the group exited the summit. BigFoot and I, joined by a couple others, descended the ridge just enough to block the wind.

We weren’t ready to completely say goodbye to Max Patch. Instead, we pitched our tent pointing east and said good night to the full moon.

After the hike and play time, I slept like a rock that night. And was delighted in the morning to see the clear sunrise.

I’ll never forget the beauty that was Max Patch – the colors, the people, the permanent smiles. It was truly one of the moments where life takes your breath away. For us, a reminder of why we came to the woods. Why we left our loved ones and things to walk every day up and down mountains. It was a gift. A promise. A reward. Truly, magic on Max Patch.

← From The NOC through The Smokies
Hot Springs, Erwin, and The Roan Highlands →

6 Comments on “Magic on Max Patch”