Well, today is the big day. We’ll take our first of a million steps down the Pacific Crest Trail beginning right at the US / Mexico border. All the logistics are done, the bags are packed, and we’re as ready as we’re going to be. We spent last night in San Diego hosted by amazing friends (thanks Lauren and Cody!) enjoying the last bit of tv, comfy couches, and precious nectar from the beer lords. Today, a new life begins…again.

It’s been six weeks since we left Stratton Mtn Resort in Southern Vermont where we spent our winter working at a ski resort. As sometimes happens in the seasonal jobs world, we got an interesting job offer from my head chef that would take us about as far across the country as possible, coincidentally extremely close to the southern terminus of the Pacific Crest Trail. While we were in Vermont, we set everything up to be in Indio, CA working catering for one of the world’s largest music festivals – Coachella. All said and done with load in, two weekends of Coachella, one weekend of Stagecoach (a large country music festival at the same site), and load out, we lived and worked in Indio a full month.

We arrived by plane to San Diego April 4 after driving across the country from Vermont to Portland, OR with a quick week in Indiana to prepare for the drive, the job, and the thru-hike as well as spend some time with all the people we love. To say we were busy is a dramatic understatement.

After our drive out west, we spent 5 relaxing days in Portland enjoying the new arrival of dry spring weather with another couple from Indiana that has agreed to babysit our minivan until we finish the trail. Parting from the van via plane to San Diego, I realized we would essentially be walking back to it. Woof. 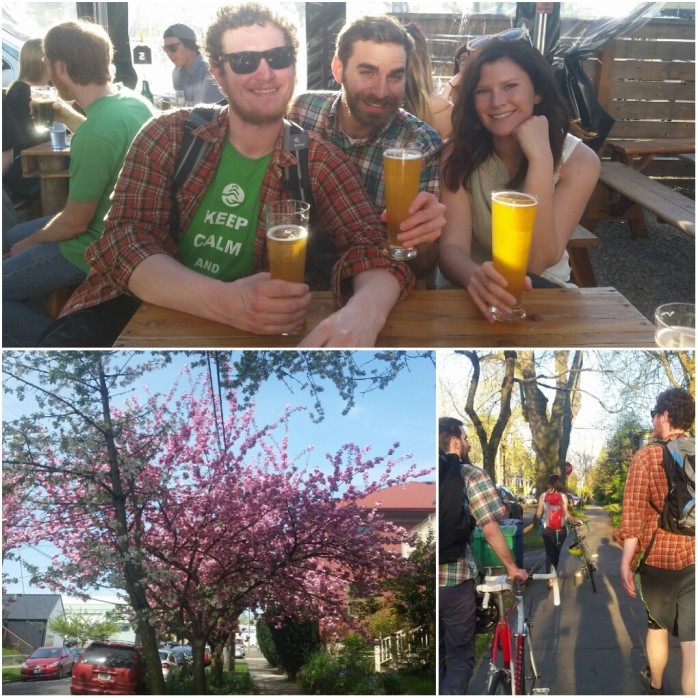 When we landed in San Diego, we quickly snagged our rental car and starting driving east into the mountains. I rode along somewhat shocked at the contrast of the Green Mountains we had left 2500 miles away just 2 weeks ago. After nearly 3 hours, we had arrived in the desert of Coachella Valley .
We went straight to the festival site and met up with Jimmy who had the keys to our employee house for the month. Jimmy introduced us to the owners and bosses who would be leading the team through the long road ahead. We left site and killed a couple hours at a local brewery. We eventually checked into our home for the month, a polished four bedroom that was decked from floor to ceiling in Pier 1 decorations including oversized chess pieces, dozens of sequined towels, and beaded pillows. We quickly snagged a room knowing that in the next few days more people would arrive to share the space. This four bedroom would house 8 adults for the month, all of whom had worked at Stratton Mountain Resort this winter.

We had one day off to get adjusted, then we hit the ground running on site. From day one, we were working 12 hour shifts which would soon increase to 16 hours.

Our employer, TaDa Catering, has been working with Golden Voice, the producers of Coachella and Stagecoach, for many years. At the festival, it’s TaDa’s job to feed the producers, staff, artists, and special guests breakfast, lunch, and dinner. There are even overnight shifts to feed those working around the clock. It’s a pretty serious operation.

The week and a half preceding the festival was pretty slow which gave us a chance to adjust to the long hours, desert heat, and the flow of a new job. This was actually my first catering gig, but with years and years of food and beverage experience, I caught on quick.

Once the staff got acquainted enough with the demands of the new job, we really worked as a machine. When the show weekend hit, it was all hands on deck and everyone needed to be firing at full speed. We served nearly 1300 for breakfast, 2000 for lunch, and 2000 for dinner Friday, Saturday, and Sunday of the event. After each long 16 hour day, the idea of attending the festival seemed like a joke. We barely had time for one beer before it was time to sleep and do it all over again.

But it was hard not to be proud of the product. Owner, Shellelyn, has some of the highest standards in the industry, and she gets incredible results. Additionally, Head Chef Mike is a culinary wizard. It’s one thing to make incredible food for one service at a restaurant. It’s another to cook for 2000 three times a day in a mobile outdoor kitchen in the desert. From the quality and taste of the food, to the presentation, decor, and use of color, TaDa is truly magical and left me totally “wow”-ed.

Coachella Weekend 1 came and left, and we all finally got a day off. We returned to work with a slower pace knowing what was waiting for us on the weekend. Though it was another brutal weekend, Coachella Weekend 2 went by quickly. By this point, all of the house and our co-workers were feeling the effects of 70-80 hour weeks, desert heat, and a severe lack of sleep. With Coachella behind us, we had one more show weekend of Stagecoach to conquer that would have significantly fewer people to serve.

We did our best to hide our haggard appearance and tried to smile through the remaining 10 days. By this point, my life had become a cruel version of Groundhog Day. Get up, greet the same people, drink obscene amounts of coffee, serve all three meals, go home, have one beer, get very little sleep, repeat. We were all ready to be done.

After the days slowly peeled off, the time finally came to leave Coachella Valley. I had been coaching myself all month that finishing the job meant heading virtually directly to the trail. I actively reminded myself of the long road ahead.

On Wednesday morning, all the housemates went our separate ways happy to be done and pleased with our financial boost. Sean and I drove back to San Diego where we met up with our friend Lauren who would drive us to the trail two days later.

Currently, we’re PCT bound nervous excited for the 5 months ahead. Keep following along for trail updates. Catch you on the flippity flop.

7 Comments on “A Unique Pre-Trail Experience in Coachella Valley”