From Sand to Snow – Doing the Sierra Shuffle on the PCT 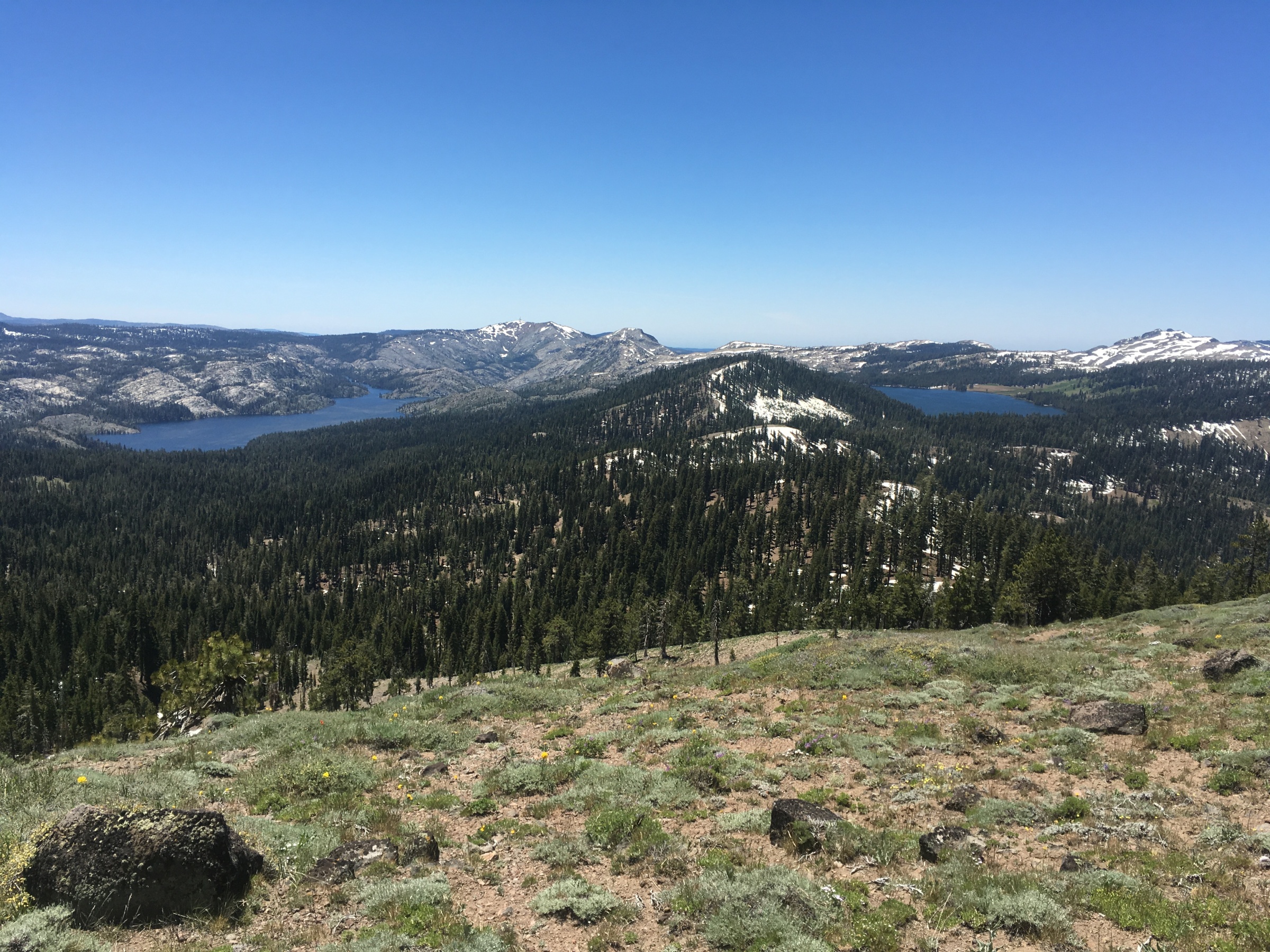 After two days off trail in Los Angeles, our friend Anna drove us back to Agua Dulce. We said our thank yous and goodbyes and entered “Hiker Heaven,” the Sauffley’s home, where they provide water, showers, laundry, and tent space for hikers. We weren’t surprised to see a couple dozen hikers already there upon arrival. We decided we would wait out the heat of the day and resume hiking later that afternoon. As we relaxed, hikers continued to roll in. We learned that a couple nights prior, Hiker Heaven had hosted over 100 thru-hikers, a new record. We realized we were right in the middle of a huge hiker bubble that stretched a couple hundred miles north to Kennedy Meadows. And everyone was talking about their plan for the Sierra section ahead.

This year, fortunately for draught stricken California, the Sierra range received quite a bit of snow. For PCT hikers, however, this becomes a logistical issue. A few hikers bought ice axes and crampons or microspikes and continued marching north to Canada crossing sketchy 13,000 ft icy passes, navigating an invisible trail, hoping not to need their self arrest tools.

But most hikers, ourselves included, weren’t interested in traversing 300 – 400 miles of snow pack. So what are the other options?

1. Wait it out. For snow melt, every day counts. Some hikers went home, to a friend’s, to Vegas or L.A., or slowed their pace to wait for enough snow melt for safer passage.

2. Skip the Sierra Range and pick up the trail elsewhere. There would be infinite options for picking up the trail, except that hundreds of miles of trail are also buried in snow pack in northern California, Oregon, and Washington. Thus, the choices are a bit limited but still plenty.

From Agua Dulce to Hiker Town, we evaluated and considered our options asking ourselves what we wanted out of our PCT experience, what our definition of a successful thru-hike was, and if we really wanted to be in the hiker “bubble” for the entirety of the trip.

After a night in Hiker Town (a totally bizarre hiker haven) watching hiker after hiker roll through, our decision was becoming apparent – we wanted out of the bubble and we didn’t want to pass through the Sierra covered in snow. Skipping the Sierra now would give us solitude on the trail, better weather in Washington, and considerably less sketchy high passes and water crossings in the Sierra. The decision was made. We were going to leapfrog the Sierra Range.

The next thing to decide was where to pick up the trail and how to get there. After a bit of research, it seemed there was still snow pack up to the Tahoe area and then again in Oregon, leaving about a 500 mile stretch of northern California with minimal snow cover. We put our sights on Truckee just north of I-80 where the trail would be under 9,000 ft.

We left Hiker Town with a plan made, a car rented, and a room booked in Tehachapi 50 miles ahead. During this stretch, we walked along the Los Angeles aquaduct, through the country’s largest wind farm, and in some of the highest temperatures we’ve seen yet. 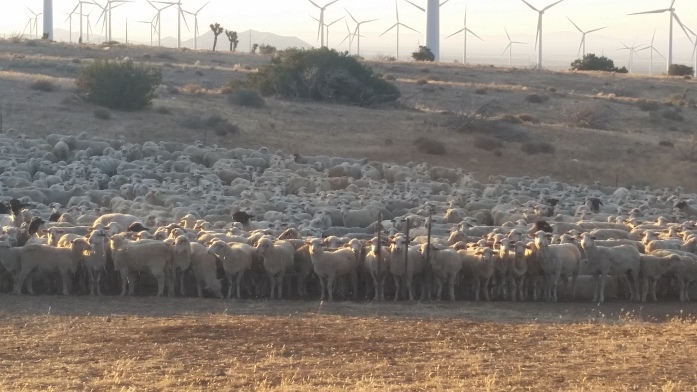 We arrived in Tehachapi and fulfilled our food and beer dreams. We met up with the couple that had booked the car and discussed the next day’s travel plans. But they suddenly changed their minds. They really wanted to complete the desert section and stick to a true northbound hike. Well, I guess we would continue north on foot.

After our night’s stay at the hotel (which was totally booked with partying hikers), we went to Burger King for breakfast intending to hike out in the early evening. Inside, another hiker overheard our conversation concerning the skip. Mike interjected and informed us that he was picking up a car in a couple hours and was skipping the Sierra. He invited us to join and gave us his number.

We returned to the hotel completely undecided about what to do. After cleaning our gear and going back and forth, we returned to our original decision and took Mike up on his offer. Within two hours, we began the six hour drive to South Lake Tahoe. The next day, Mike drove us to Truckee and dropped us off at the I-80 rest stop that has a spur trail to the PCT. In a seven hour drive, we skipped 590 miles of the Pacific Crest Trail.

Our new environment was different in every way from the desert we left in Tehachapi. Here, it was slightly chilly, the trail was made of dirt, and water was plentiful. 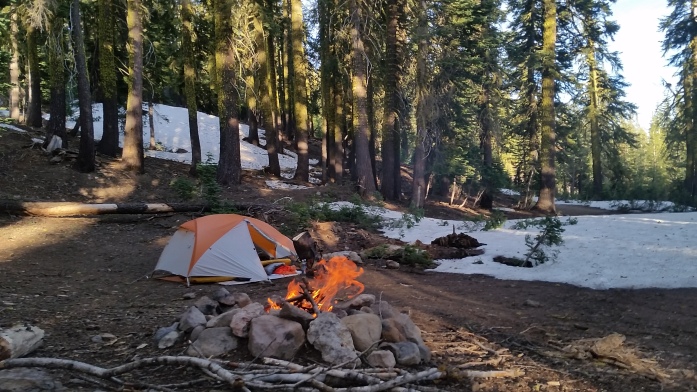 And it didn’t take too long to find snow. A lot of it. Goodbye sand, hello snow. We did our best using the GPS and our Guthook App to navigate the buried PCT. For the first 15 miles, the trail was completely covered by 3-8 ft of snowpack. It took us all day to travel 9 slippery miles and half of the next day to complete the next 6. We were frustrated and cold, hoping to reach something a bit more navigable.

We quite literally went from this…

http://youtu.be/bJnWP5ZVgAo
Eventually, and oh so happily, the snow receded and dirt trail presented itself. Once a steady stride became possible, we took off increasing our mileage a little every day and enjoying the solitude and beauty in northern California.

Since the skip, we have only seen about a dozen hikers in the 170 miles we’ve walked north of the I-80. This includes several leapfroggers and flipfloppers as well as 3 brave hikers who trekked the snow covered Sierra.

Last night, we made a last minute decision to come into the town of Chester and get a room for the evening to dodge the forecasted snow and 22° low. At the highway to town, someone had left a note offering rides to and from town. We texted him, but quickly got a hitch and let him know the ride was no longer needed. He texted back and offered us a place to stay in his trailer.

Hmm… what do you do when a stranger texts you to stay in his trailer? Well, in the real world, you don’t say “Wow, really!? Can you pick us up at the grocery store??” But, we’re in the hiking world now, so that’s exactly what we did.

Our host was quick to arrive and brought us back to his comfortable home where we were warmly greeted by his family. They offered us cookies, showers, laundry, and beer!!

We put our bags in his cozy camper trailer that could probably sleep 10 and were soon joined by two other hikers. They had both trekked through the Sierra. One of the hikers was an especially rare breed. His mission this year was to complete the Appalachian Trail, the Pacific Crest Trail, and the Continental Divide Trail back to back known as the Calender Triple Crown. If (when) he finishes the PCT and CDT, he will be about the sixth person to ever complete the 8,000 miles in one year. As aspiring triple crowners ourselves, it was an honor to get to spend some time with Legend. Even better, our trail angel took us to a microbrewey to chat about our journeys over beers. Good luck, Legend! We are rooting for you!!! (Check out more about his story here.)

Tomorrow, after today’s zero, we will head out from Chester continuing north. Yesterday, we passed the PCT half way mark meaning we have 1325 more miles to walk to the Canadian border. From there, the plan is to hitch our way back to society and take a train from Seattle to Bakersfield, just 20 miles from Tehachapi where we left off. Instead of ending in Canada, our hike will finish after hiking through the Sierra Range, Yosemite, South Lake Tahoe, and finally Truckee. Will I have walked from Mexico to Canada? No. But I will walk the entire PCT from May 6 until late September on my own terms.