It was almost exactly one year later when I found myself standing on the Pacific Crest Trail right where I had left off. Though the trail looked much the same, I had come to the trail different. I admired the mountains and trees with fondness and appreciation, unlike the year before when the trail seemed like some form of torture. I was happy to be back, to complete something I had started, to set my own measures and definitions of success. 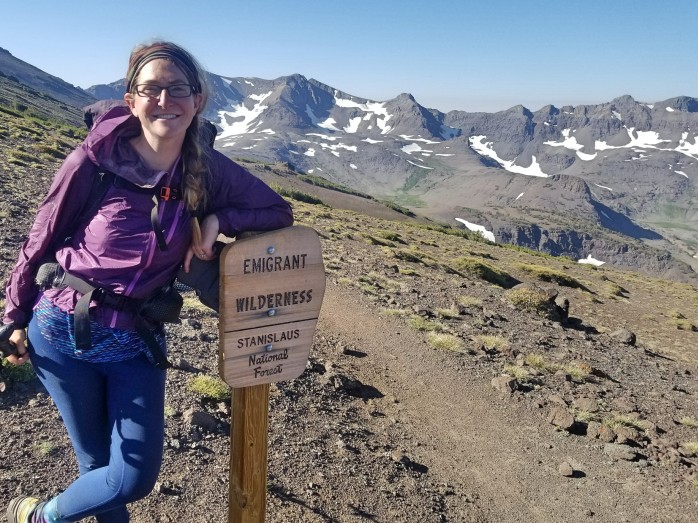 To clarify – in 2016, my now fiance and I began the Pacific Crest Trail from Campo, CA, at the US / Mexico border intending to walk to the Canadian border over the course of about 5 months. It was our second long distance hike after completing the 2,189 mile Appalachian Trail in 2015.

After about a month and 550 miles of Southern California desert, we made the decision to skip the still snow covered High Sierra section and pick up the trail in Northern California where we would continue hiking to Canada. We made it to Canada on August 24 with 2,050 miles done and 600 to go from Tehachapi to Truckee to close the gap we skipped.

We returned to the windmills in the Mojave desert, a stark contrast from Washington’s North Cascades, and continued our northward trajectory. Eventually, we put the desert behind us and entered the magic hiding in the High Sierra. But our days were becoming short, our will was wearing thin, even the beauty surrounding us couldn’t pull us out of the funk.

So, when we were offered a place to decompress at a friend’s near the coast, we jumped on the opportunity and said goodbye to completing the PCT in one season leaving 250 miles left undiscovered between Mammoth Lakes and Truckee. We knew we’d be back and that eventually we would complete what we started.

Well, I didn’t concretely know that I would be back a year later, but here I was just outside of Mammoth Lakes, as if I’d never left. It was significantly warmer than it had been on the Colorado Trail just a few weeks prior though we were at similar altitudes. We began on a side trail from Red’s Meadow Resort that would give us a closer look at Devil’s Postpile National Monument, then we were on our way linking footsteps from last year’s adventure.

Not being crunched by time, we decided to walk 15-20 miles per day which translated to 16 days to walk 250 miles from Mammoth Lakes to the I-80 just west of Truckee. 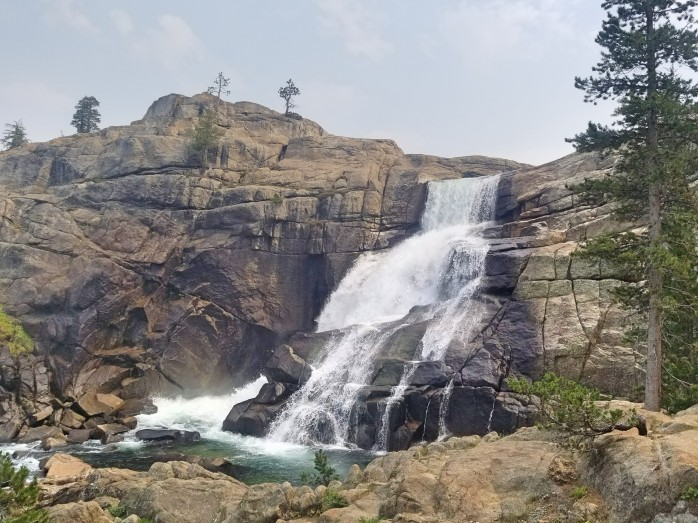 We were delighted to have plenty of time to enjoy ourselves and our surroundings – something you don’t get much of on a thru hike. The craggy mountains, crystal clear alpine lakes, and perfect weather made me question why we ever left this section.

But I hadn’t completely forgotten the pain of a thru hike, the mental and physical exhaustion, the mostly unanswered question of why in the world we undertake hiking thousands of miles all at once. 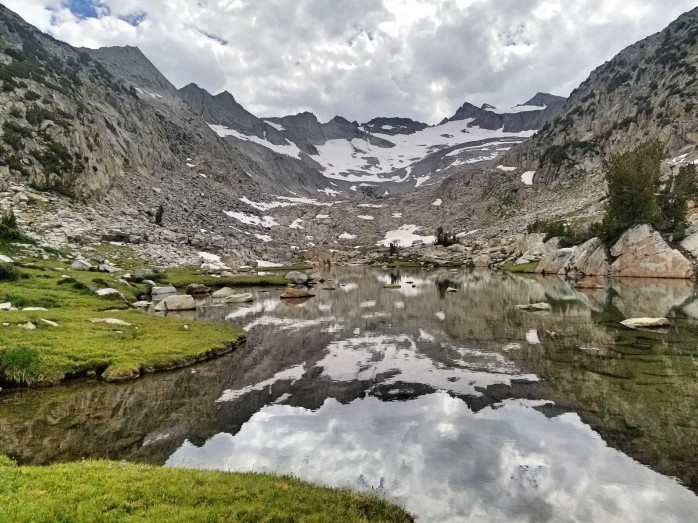 Other than a severe and sudden hail storm, our time on the PCT was entirely pleasant. We had otherwise perfect weather and jaw dropping views.

Sixteen days from Mammoth Lakes, through Yosemite, and around Lake Tahoe were over before we knew it. I stood a few feet away from the Donner Pass Rest Area off the I-80 where a dear friend was awaiting our arrival.

I finally knew every step of this trail. To the south were the epic structures of granite, marvelous sparkling lakes, and eventually sand, rocks, and relentless sunshine all the way to Mexico. To the north, proud volcanoes welcome you to the Cascades with views shifting from lava rock formations to the damp, moss covered wilderness areas of the Pacific Northwest. The Pacific Crest Trail is truly all encompassing, the best of the West, a gift for all those willing to walk it. And though it makes my story a bit more complicated to tell, I strongly feel this was the right way for us to hike this trail.

I will admit, finishing the trail this way did feel considerably less momentous than standing on Mount Katahdin in Maine after walking a continuous footpath from Georgia on the Appalachian Trail. However, I still question if the ego boost of thruhiking is worth the pain, sacrifice, and suffering necessary to complete these trails from end to end. So often, thruhikers get caught up in the destination, that we miss out on the journey. Though we’d enjoy stopping to smell the roses, we obligate ourselves into long days and punishing amounts of miles. I can’t imagine how John Muir would react to us “crushing 25s” in a machine like fashion through the section with his namesake… 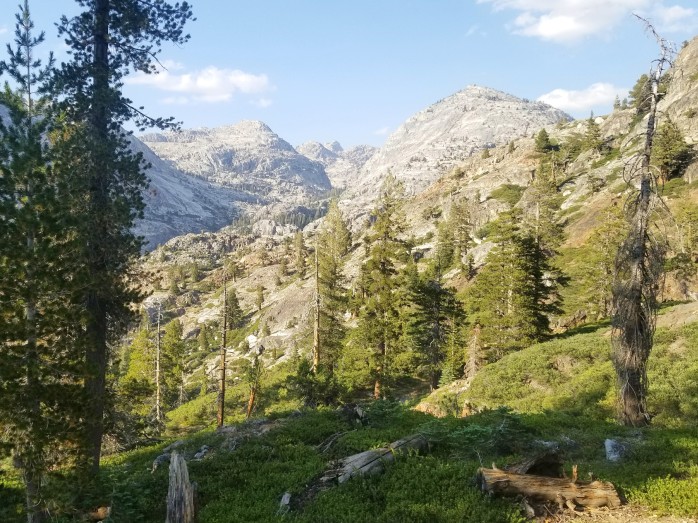 Yet somewhere between this juxtaposition, I’ve fallen in love with long distance hiking and the freedom it brings with it. I consider myself privileged to be allowed the time and ability to discover these incredible public spaces. And I’m excited to announce that next year we’ll be going for the triple crown of hiking by attempting the Continental Divide Trail. Ideally, a thruhike, and maybe then we can put all this walking to rest. 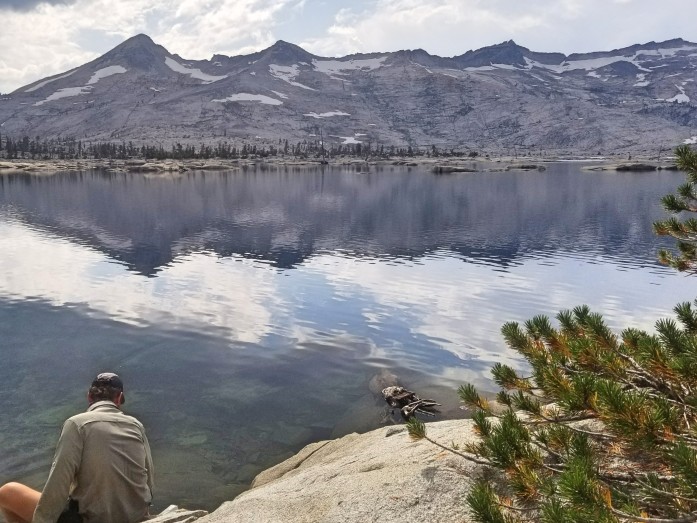 So, I invite you to follow along as we prepare for yet another long distance hike and discover a bit more of this infinite geography laid out on this beautiful planet. It doesn’t seem real – but by this time next year, I could be a triple crowner 👑👑👑