Through a series of four hitches, we made our way back to Onion Valley Campground and set out for Kearsarge Pass. I resented having to climb the extra 2500 ft over 6 miles but ultimately had no choice. Once at the top enjoying the views, I realized it wasn’t that bad.

We decided to get in a few PCT miles that evening and proceeded to climb another 2000 ft over Glen Pass. After the steep uphill, we descended into a magical series of shimmering lakes tucked into the mountains. I found myself somewhat disappointed that we were arriving at night fall and wouldn’t see Rae Lakes with full sunshine. As the trail meandered through the bodies of water, I could see some of the extent of the lakes’ clarity as schools of trout swam by. It was completely dark when we made it to camp, and we did our chores by headlamp. Just before we went to the tent, the nearly full moon rose above the mountain ridge like a spotlight in the clear sky illuminating the surrounding mountains and making the headlamps unnecessary. The moon puts on a spectacular show above 10,000 ft.

Morning came, and we found it difficult once more to break out of the bag. At 10,500 ft, it had frosted overnight. Eventually, we braved the chill, hurried through our morning chores, and left camp right before 8. Just around the corner from our campsite, we came across a group of a dozen bucks that were neither surprised nor scared to see us. We walked away from Rae Lakes aware that we hadn’t enjoyed its full potential or beauty. 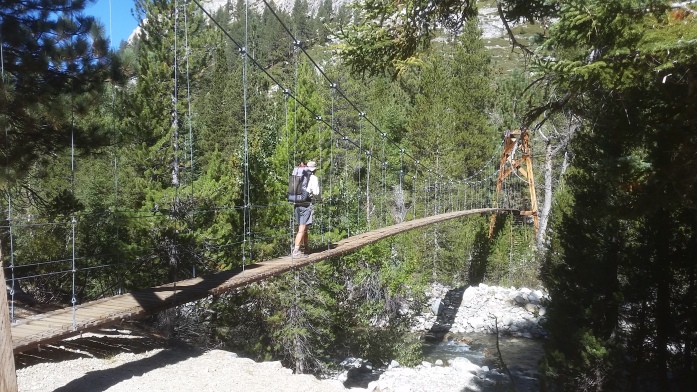 After a couple hours of descent, it was once again time to start climbing. This section was a pattern of climbing 2000 – 3000 ft then descending the same amount on the other side with the steepest part being just before and after the pass. Small glacial lakes near the pass spilled crystal clear water down streams that eventually pooled into a larger lake whose outlet cascaded into breathtaking waterfalls. The series of passes was equally as challenging as it was rewarding.

But our desire to make miles really was getting in the way. We were working on a 120 mile section which would leave another 250 from Mammoth to Truckee. We were still estimating another 2 weeks minimum to wrap it up if we were able to hike between 20 and 25 miles per day. Our pace had slowed to under 2.5 miles / hour meaning that, even with very minimal break time, 20ish miles took every second of daylight to accomplish. It got to the point that even stopping to take a picture made us feel guilty for “wasting time.”

It became very apparent that neither of us were very happy with this version of hiking. We had both become mile machines with our eyes on the prize of being done, of sitting, of resting, of not being constantly hungry.

Oh yeah, what a fun realization I had on our second night out that we had miscalculated how many dinners we needed, and we were short one. Picking up the mileage wasn’t going to happen, so rationing it is. We’d save a granola bar here or a cookie there just so we know we’d have something to eat.

To make matters worse, I found myself in an empty headspace trying to push out the recurring thoughts of how much time and distance had passed since I last checked. For hours on end I was hiking when I didn’t want to be, thinking about the food I didn’t have, climbing passes I barely had the energy for, and hoping to get below 10,000 ft to avoid freezing sleeping temperatures. My body and mind were exhausted. Could I pull this off for 15 more days? Even if I can, do I want to?

The days conquering the passes and nearing Mammoth Lakes repeated in a Groundhog Day like fashion. Even looking at my quickly snapped pictures I can barely distinguish one pass from the next. 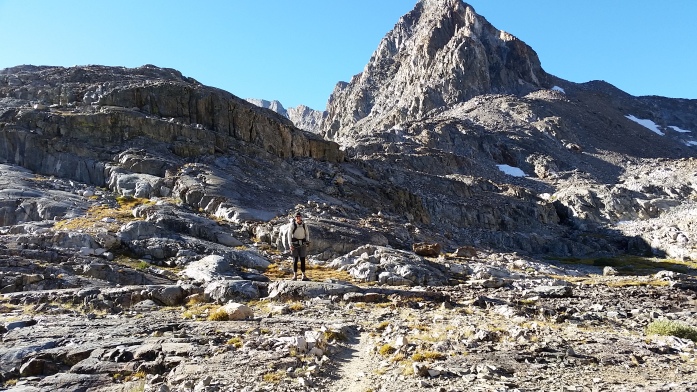 Muir Pass was our last large climb before Mammoth. We took a quick 15 minutes at the top then continued on our way. A few miles north, we walked alongside Evolution Lake, snapped a couple pics, and kept walking. As we walked away, I noticed the mountains north of us were less jagged and took on a more rolling look. I knew we were leaving a very unique part of the PCT behind us that we barely even said hello to. 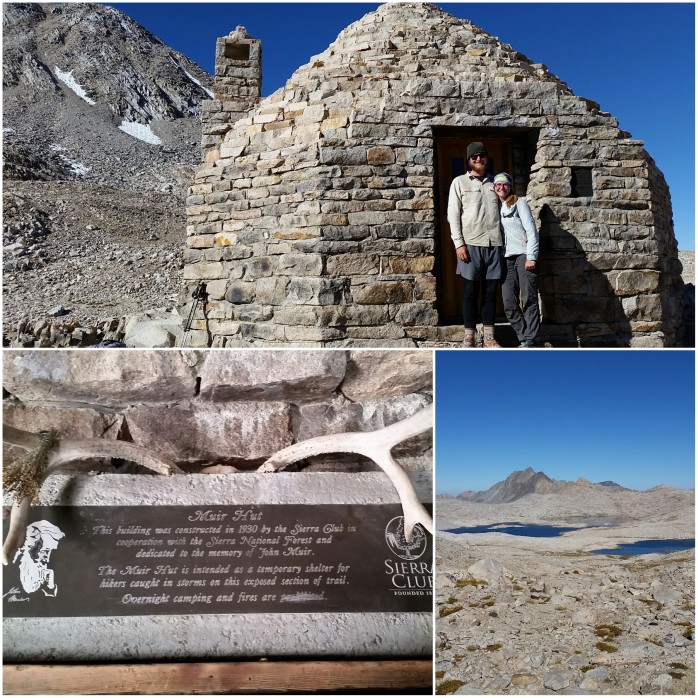 It really hit me over lunch a couple hours later how much it bothered me that we didn’t spend time at that lake. The trail we had traversed over the last few days contained a landscape that’s impossible to experience without the hard work we had done to get there. It’s a whole ecosystem, a world of its own at this altitude. And we just walked by, thinking a picture would be enough. It wasn’t.

We spent our last day before Mammoth hiking 25 miles excited to get to Red’s Meadow Resort, a large campground with a cafe, general store, and a road where we could hopefully get to town. We were about an hour away when a familiar face came walking towards us. Our friend, Diva Dan who we had met on the Appalachian Trail, was working on his southbound thru-hike. We had anticipated seeing him soon as our paths had already crossed once in Oregon. We spent a few minutes catching up and giving insight into what was coming up. Dan informed us the store and restaurant were already closed at Red’s and the summer bus to Mammoth was already stopped for the season. Thankfully, he mentioned a well stocked hiker box at one of the walk in campsites, and the smiles returned to our faces knowing we would have something for dinner. We said our goodbyes and good lucks and continued walking.

Once at Red’s, we immediately went to raid the box and pulled together a meal. In the morning, we arrived at the cafe as soon as it opened and rejoiced at the site of hot coffee and breakfast. At 8:00, we began the process of hitching a half hour ride into Mammoth.

After a half hour of nothing, a woman offered us a ride a few miles down the road to the parking area for Devil’s Postpile National Monument. We took the offer hoping to see more cars. Suddenly it was 9:00. Then 9:30. 10:00. I was just about to run out of Rent songs to sing to Sean when at 10:30 we finally got a ride. I was so thankful someone stopped, but my frustrations were boiling over. We were hoping to resume walking by noon to still get in our 20 miles, and we had just spent the large majority of our rest time on the side of the road. The nice couple brought us to the Mammoth post office to retrieve our package, then we decided to soothe our frustrations at Mammoth Brewing.

I dove into the food and beer evaluating our choices. This was most certainly not the way I wanted to hike. Hiking shouldn’t feel like a burden nor an obligation. Without saying too much, we both were able to read the other: let’s be done.

I sipped my beer slowly weighing the emotions, but ultimately I knew it was better to forgo our thru-hike attempt. My relationship with the PCT had become one of obligation and little enjoyment. I desperately wanted to hike these 250 miles but with significantly less pressure. I wanted more time to enjoy the incredible beauty here. I wanted to relax. And one of the best parts about these trails is that they’re not going anywhere. They will be here when we’re ready for them.

But what about a thru-hike? Oh yeah, I don’t care about a thru-hike. I even recall an article I wrote last year called “It Doesn’t Have to Be a Thru-hike.” Frankly, I find it infinitely more important that you enjoy and experience a trail than to simply walk it. I fully believed in our capabilities to complete the PCT, but I most certainly preferred the idea of completing this stretch because we wanted to, not because we had to. The cliche rings true: it’s about the journey, not the destination. And what a journey it’s been.

We talked this all out over lunch and both agreed – we would finish the PCT another time – slowly, intentionally, deliberately.

So, I’m actually quite happy to say, in just shy of 5 months Sean and I hiked 2,400 miles of the Pacific Crest Trail. No more, no less. We left the trail without regret and intensely look forward to when we can return and enjoy the magic of the High Sierra.

← Into the High Sierra at Last
Working in a Winter Wonderland →

3 Comments on “Journey Over Destination”