Summer of Summits: Mount of the Holy Cross

This summer we’re attempting to summit as many 14,000+ ft mountains in CO as possible, and we’re reaching the trailheads by bike! Join us on our Summer of Summits.

Yep, we took our first Zero Day of the trip. Sean’s bike needed a new spoke, so we took the excuse for a day off in Frisco. It was a much needed amazing day of movies, snacks, and rest.

With Big Red’s spoke fixed, we we began our 45 mile ride from Frisco towards Half Moon Trailhead and our next 14er, Mount of the Holy Cross. Once again, we enjoyed riding on  Colorado’s bike paths adjacent to I-70. The first 14 miles we’re fairly slow as we climbed nearly 1600 ft up Vail Pass. The effort was rewarded when we crested the pass and started gliding down towards Vail Village. We effortlessly cruised 15 miles down 2500 feet in about a half hour. Sean noticed his brakes were shot, so we checked around Vail Village to see if any bike mechanics were available. As luck would have it, we found someone to check out the bikes. Sean needed new brake pads and a new rear rotor. Brakes are important! An hour and a half later, Big Red was actually ready to ride again. We left Vail Village around 4 pm and cruised the next 10 miles on pavement.

The final 8.5 miles were on a chunky dirt road with 2300 ft of elevation gain. Yikes. We began around 5 and started our slow ride up to camp.

Halfmoon Campground is closed this year due to COVID-19, but dispersed camping is permitted along the road at least a half mile away from the trailhead. It was a slow and steady ride with plenty of potholes, partially buried rocks, and stretches of washboard that left us exhausted despite the fact that we had just taken a zero day.  It took nearly two and half hours to get the 8.5 miles to our dispersed campsite. We smashed some food and set a 3:30 am alarm for our hike the next day.

We got up early and rode the half mile to the trailhead, and began our ascent at 4:30. Mount of the Holy Cross trail is a bit longer than most of the others we’ve hiked with 5500 ft of elevation gain over 10 miles. Initially, the trail rises 1400 ft, then loses 700 ft, then finally climbs 3400 ft to the summit. Despite the tough terrain, we were happy to be in a wilderness area with very few people.

As the sun rose, we got magnificent views of Mount of the Holy Cross and the surrounding mountains. Once we got above treeline, the trail turned into a never-ending staircase winding through a boulder field.

We took it slow and steady seeing only a handful of people along the way. The final stretch was spent picking our way through boulders, but at about 8:40, we finally made the summit.

The views were gorgeous, and we were able to distinguish some 14ers we had climbed and others in our future. We especially enjoyed seeing the Maroon Bells and the peaks in the Aspen area after having spent our winter there.

After snacks and a short break, we started the long walk back to the bikes down the boulder field, the never-ending stairs, and finally up and over the wooded trail and back down to the trailhead. It was truly one of the prettiest hikes we have done so far, but also the most exhausting. 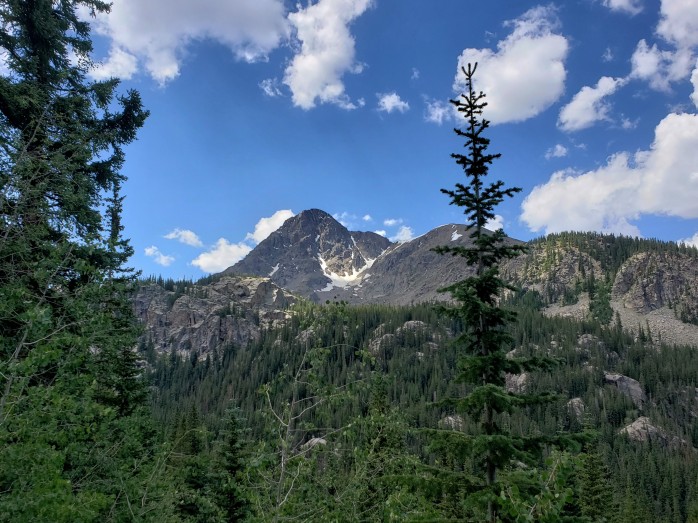 At 12:30, we exited the trail and went back to camp. We were wiped, but still had 45 miles of riding ahead of us planned to the next trailhead. We ate a little lunch, packed up camp, and began riding the 8.5 miles downhill to the highway. It took about an hour of riding the brakes and dodging obstacles until we were back to pavement. Then, the uphill battle began.

Immediately, the highway led 1000 ft up over 4 miles. This slow and steady took almost an hour in the burning sun. After the pass, we crossed Red Cliff Bridge and continued on.

We had hoped for some significant downhill cruising after pumping the pass, but no such luck. Although we got a couple “free miles,” Tennessee Pass was next with another 2000 ft of elevation to gain. The familiarity of the area set in, and we smiled as we saw where the Colorado Trail / Continental Divide Trail crossed Highway 24 on its way over Kokomo Pass to Copper Mountain.

We took lots of breaks, but both felt like we were hitting a wall. We realized that aiming for another trailhead and hiking a 14er the next day might be out of reach. We reset our goal to Leadville which was still a challenge considering the work we had already done that day.

After Tennessee Pass, we were thrilled to get some relief cruising about 4 miles gently downhill leaving only 3.5 miles left to Leadville climbing slightly into the highest incorporated city in North America at 10,152 ft. We were so grateful to find a room and slept like babies having completed our biggest day of the trip.

Now, onward through the Sawatch Range.

We are Bekah and Sean, out on an adventure to summit as many CO 14ers as possible this summer and reaching them via bicycle! Follow along here, on Instagram, or Facebook as we complete our Summer of Summits.

5 Comments on “Summer of Summits: Mount of the Holy Cross”